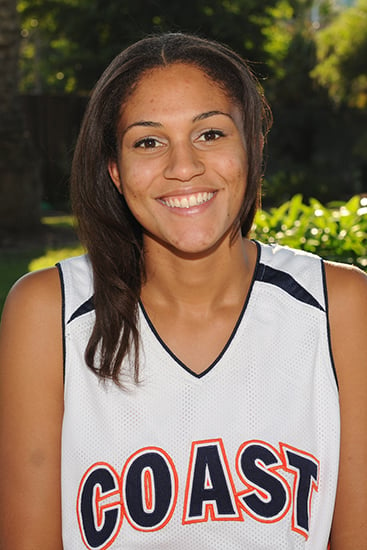 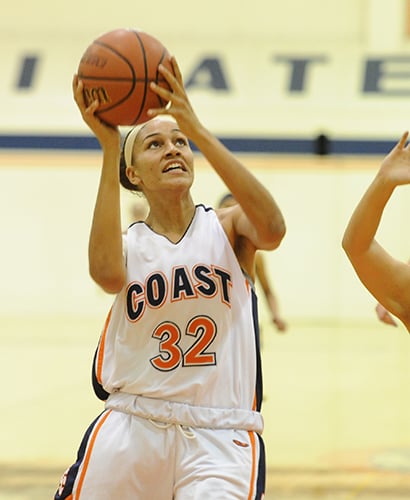 The Orange Coast College women’s basketball team is in a great position to become conference champions — with forward Raechelle Davis spearheading the charge.

“Raechelle has dramatically improved a lot from last year. I have lots of respect for her on and off the court,” head coach Mike Thornton said of Davis, one of his starting forwards.

Davis is also averaging 10.2 rebounds per game. She is also one-tenth of a percent behind the league’s rebounding leader Alexis Casillas from Irvine Valley College.

And Davis is humble about her abilities.

“My success is all thanks to the coaches who kept on believing in me,” Davis said.

A graduate from Orangewood Academy in Garden Grove, Davis started playing basketball in the third grade.

Off the court, Davis lives a busy lifestyle. In addition to carrying a full-time course load, she is a mom, Thornton said.

“Raechelle is super dedicated to our team. She goes to every team event, she’s on time, and we can always count on her to get the rebounds and catch the ball when we pass it to her,” teammate Jasmine Matar, 19, an undecided major said.

Teammate Kelcie Mayott, 18, a communications major, also said Davis has been inspiring to the team.

“Raechelle has been a great player, role model and a good influence for the team,” Mayott said. “She’s really tough, because she’s been through a lot off the court.”