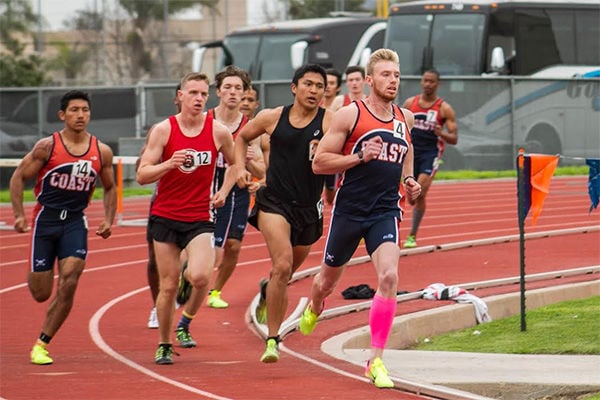 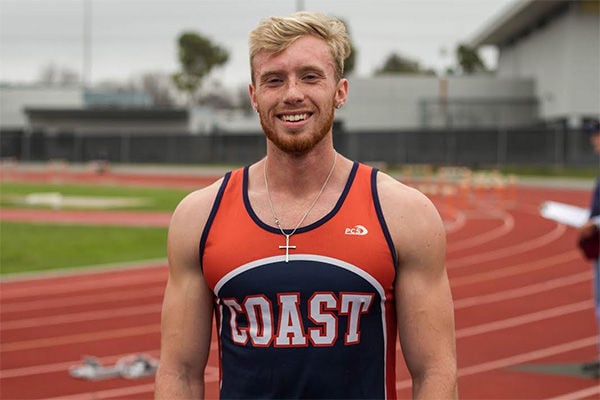 Orange Coast College track and field all-star Gabe Warner, 20, has high expectations for his future career as a sprinter and has proven to be an exceptional athlete.

Throughout his athletic journey, Warner has achieved success in multiple arenas and has taken on the lofty goal of qualifying for the Tokyo Olympics in 2020.

Warner holds records at OCC in both the 100 and 400 meters. The star athlete recently committed to Colorado State University with a full-ride scholarship, where he plans to continue his path to becoming a successful runner.

"To be honest, the biggest thing for me is winning," Warner said. "I’ve been running for six years now and track is definitely the sport I’m best at. It’s getting me into colleges and has changed my life so I am really trying to take advantage of it."

According to Warner, track wasn’t something he thought much about until his mother convinced him to join Irvine’s Woodbridge High School team. Since then, Warner has fully committed to having an athletic career as a sprinter and aims to qualify in the Tokyo Olympic trials in 2020.

"I really want to qualify for the Olympics in Tokyo. I would like to be on the four by four relay team and compete in the 200 meter sprint," Warner said. "I’m actually pretty close to reaching this goal and was really close to qualifying for the Olympic trials this past year."

Warner has proven to his coaches and fellow teammates that he goes beyond being an average student and athlete. According to those around him, Warner has shown a strong dedication in keeping his body in pristine condition.

Erich Moreno, OCC’s assistant track coach, is responsible for directing the 100, 200 and 400-meter sprints as well as relays and hurdles. Moreno has had the opportunity to help guide Warner in his performance as well as observe his personal growth.

"I’ve coached a lot of athletes at his level and they sometimes have a hard time listening but Gabe always does the extra things to be on top," Moreno said. "He’s a good individual and team player and is very personable. You wouldn’t think he is a good athlete because of his attitude."

According to Warner and his teammates, this season is expected to be filled with more record-breaking wins for the young athlete.

Jeremiah Lewis, a fellow sprinter and kinesiology major, is confident in Warner’s success.

"He understands that he has to work hard in the weight room and knows where he stands athletically and can continue to grow as a teammate and person," Lewis said. "He’s focusing on the 100 and 400 meters to see how strong he can be in that and runs with athletes as good as himself."

According to Warner, his goals for this season are high, but he intends to work harder than ever to improve his times. He said he aims to break OCC’s 200 meter record this season as well as run the 100 meters with a time of 10.1 seconds and 45.8 seconds in the 400 meters. In addition, Warner strives to meet the qualifying mark for the World Championships.

"This season, Gabe has a good possibility to win his individual events. In SoCal finals he was top three, but this year he should do much better and possibly win," Moreno said. "I think he will run one of the fastest times in the state or possibly the nation for junior colleges. I’d be disappointed and surprised if he got anything less than first."