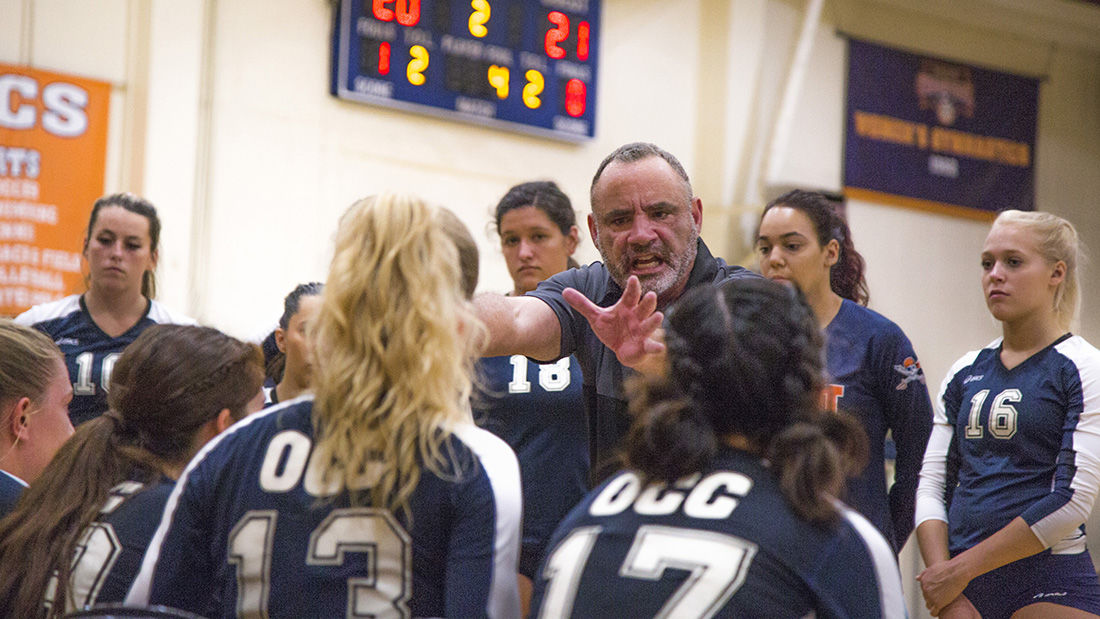 Chuck Cutenese, coach of the women's volleyball team, talks to the team during a timeout at the volleyball game in the Basil H. Peterson Gym on Friday. 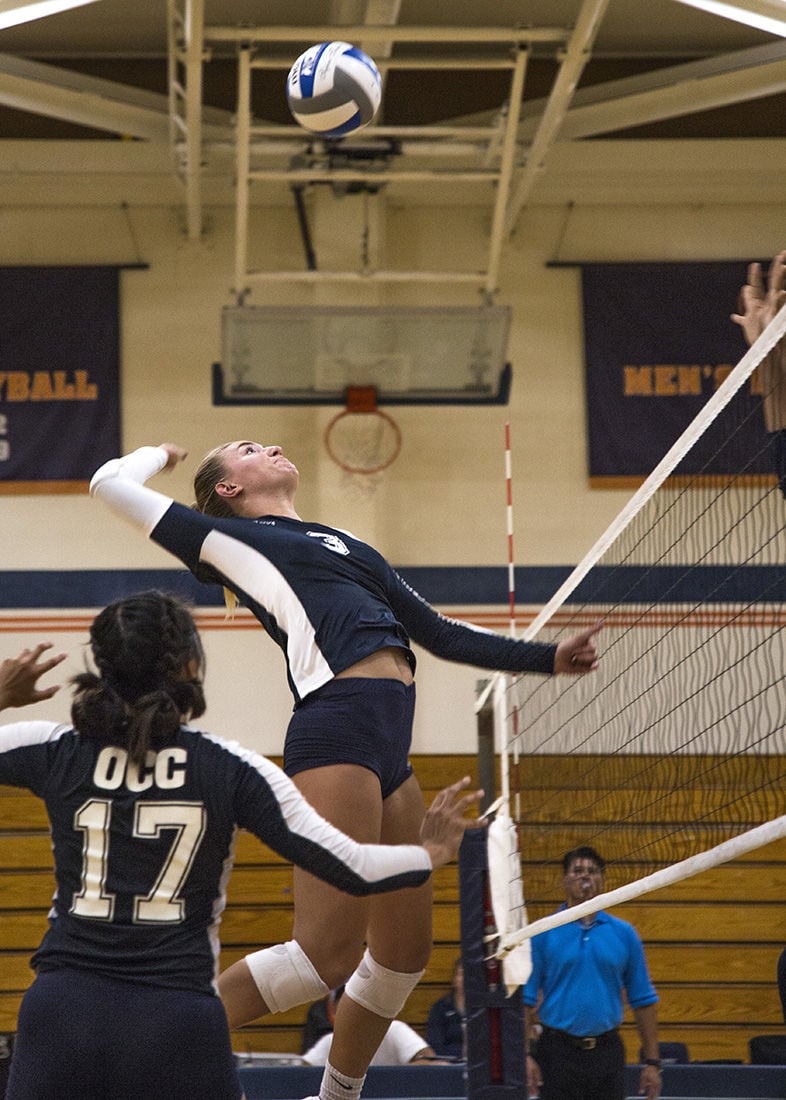 Hally Herder, an 18-year-old criminal justice major and the co-captain of the women's volleyball team, hits the ball during a volleyball game in the Basil H. Peterson Gym on Friday. 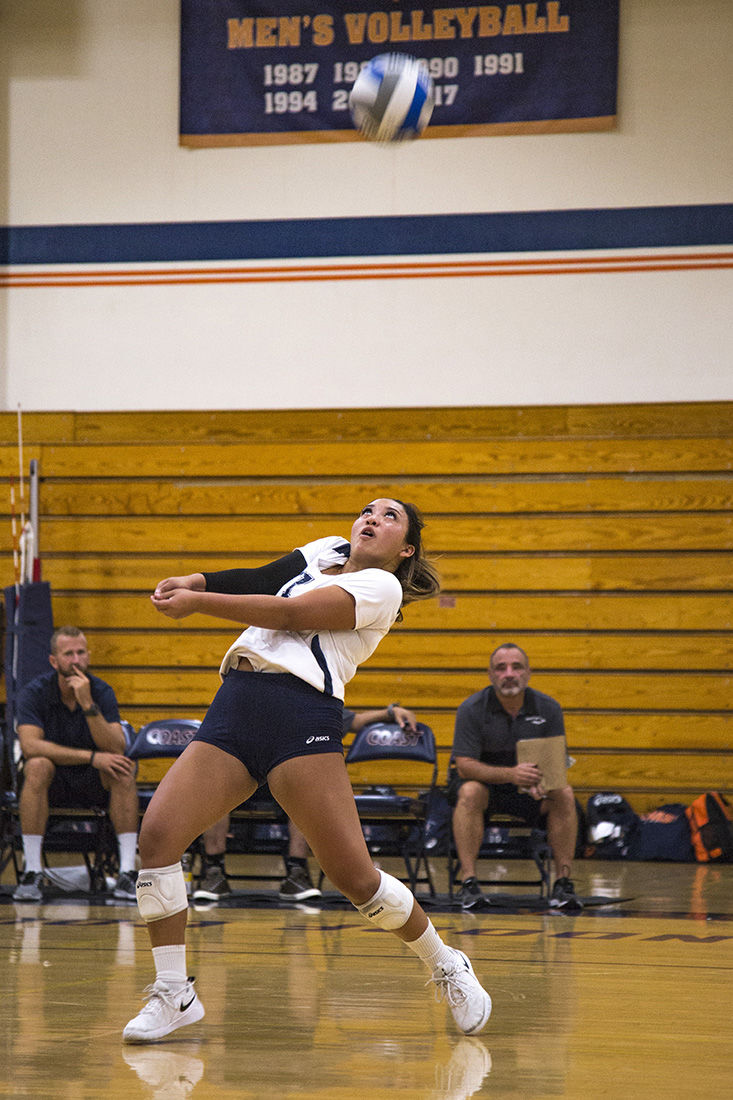 Rylee Adair, a 20-year-old business major and the team captain of the women's volleyball team, passes the ball during a volleyball game in the Basil H. Peterson Gym on Friday.

Chuck Cutenese, coach of the women's volleyball team, talks to the team during a timeout at the volleyball game in the Basil H. Peterson Gym on Friday.

Hally Herder, an 18-year-old criminal justice major and the co-captain of the women's volleyball team, hits the ball during a volleyball game in the Basil H. Peterson Gym on Friday.

Rylee Adair, a 20-year-old business major and the team captain of the women's volleyball team, passes the ball during a volleyball game in the Basil H. Peterson Gym on Friday.

Nine members of Coast's volleyball team hail from out of state

Students on the Orange Coast College women’s volleyball team this season come from everywhere, from the mountains of Idaho to the shores of Hawaii.

For student athletes at the community college level, attending schools out of state requires a great deal of commitment. Players sacrifice the comforts of home and family time, often venturing into unfamiliar atmospheres.

“This will be my 27th year coaching, 29th overall with the program, and this is most out of state players we’ve ever had,” head coach Chuck Cutenese said. “I don’t think the players coming from different states are as big of an issue as they used to be. Students out of state are able to connect on the same level with social media now, which in turn helps team development.”

With three returning sophomores, the team features a majority of young players who have adjusted soundly to a new style of play in a tough Orange Empire Conference.

Coast’s successful turnover rate to universities is the biggest incentive for out-of-state athletes considering making the move and attending the college.

“What made me want to transfer to OCC was my step-dad being a former men’s volleyball player under coach Cutenese,” Rylee Adair, 20-year-old team captain and business major from Honolulu said. “When I came out for a college visit last year, I really enjoyed the campus and spoke with a couple previous transfers from Hawaii that really enjoyed attending the school.”

Adair, a returning sophomore libero who earned second-team All-Orange Empire Conference honors last season, looks to lead her team defensively to the championship this year. Her 501 digs last season were the third highest recorded in the school’s single season history.

For the nine out-of-state athletes this season, chemistry isn’t just developed on the court. The players also dorm together in the Camden apartment complexes in Costa Mesa.

The women spend their free time off the court working, trying local restaurants, completing homework, going to movies together, and exploring neighboring cities.

“Living with the other girls at the Camden apartments allows more personal time to get to know my teammates on a greater level than I would’ve been able to get to know them on the court,” Hally Herder, an 18-year-old freshman co-captain and criminal justice major from Denver said. “The biggest insight into adapting to a new school and state has been from returning sophomores. The girls have been super-helpful, even going as far to offer tutoring to us if we need it.”

Herder, who was a three-sport athlete at Denver Christian High School, has become a prominent player for the Pirate’s offense as an outside hitter and a middle blocker, averaging 2.69 kills per set.

Off to an undefeated start, the Coast women have dominated their opponents on both sides of the court, conceding only one set. Averaging 8.59 kills offensively and 14.55 digs defensively per set, the team looks resilient heading into conference play.

Players attribute the coaching staff for their early season success in displaying vital aspects of the game that are hammered down repeatedly in practice.

“They’ve shown in a short amount of time to understand our style of play and have adapted well to learning a new system,” Cutenese said. “We are an extremely athletic group, so we are working really hard to maintain the pace we have established going into the remainder of the season.”

Women suffer their first loss of the season against Cypress

Coming into the match, the Cypress Chargers were ranked 15th in the state. The Pirates, who were ranked 16th, pushed them to their limit, battling back and forth until the very end. Coast took the first two sets after rallying back in the final moments of the match, taking advantage of Cypress’s miscues.

“We knew Cypress was going to be a good team coming in, so we expected a good match,” head coach Chuck Cutenese said. “I was pleased that we went five and it was competitive.”

With 12 of the 16 Pirates being freshmen, their lack of experience proved to be fatal, allowing the Chargers to fight their way back in the match, dropping the final three sets, with their greatest lead being five points in the third set.

Coast relied heavily on their freshmen, notably outside hitters Bailey Coffin and Kristi Black and middle blocker Hally Herder, who carried the load of offense, dominating the front court. Sophomore libero Rylee Adair dominated on defense and kept the sets close late with her serving.

“This is a young team, we start five freshmen,” Cutenese said. “It’s a learning and a growing experience, but you work with what you are dealt with.”

Heading into the all important fifth and final set, the back and forth nature of the game continued, until the Pirates fell apart at the very end. With OCC sitting on match point, Cypress rallied back and found the exact spots where the Pirates weren’t, and marched on to win the match.

“It was a good match,” Cutenese said. “We gave up runs of points, which was one of the things we were trying not to do.”

Looking ahead, the Pirates schedule doesn’t get any easier, with the rest of the Orange Empire Conference looming, and four of the Pirates’ competitors are ranked inside the top 25 in the state.

OCC will play its first conference road game Wednesday against Riverside at 6 p.m.