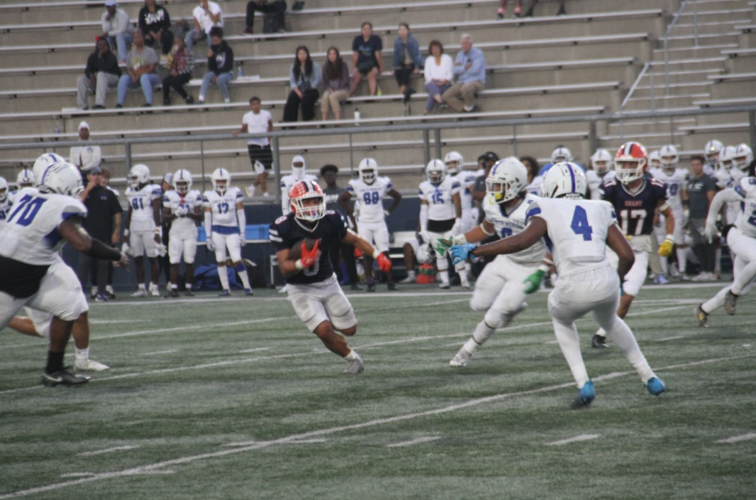 OCC running back J.P Segura (#8) runs the ball in the win against Santa Monica City College at Lebard Stadium on Saturday. 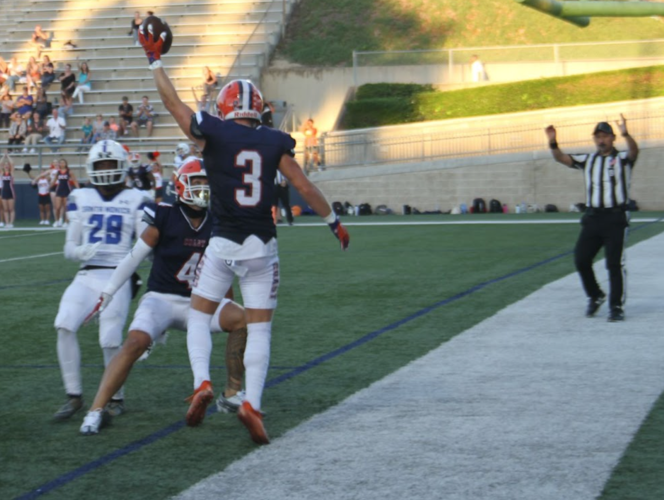 OCC defeated Santa Monica City College 41-7 Saturday in a matchup between two teams looking for their first win of the year. Coast just narrowly missed the chance to get its first notch in the win column last week in a 31-26 loss to Grossmont College, but showed signs of promise on the offensive end. Facing an 0-2 SMCC team, the Pirates offense fully clicked Saturday, while the defense held the Corsairs to just 172 offensive yards.

“This group is resilient. We're a good football team and I've been telling them that all year,” OCC head coach Bubba Gonzalez said. “We just need to come out and prove it and I thought they did that today.”

The Pirates’ special teams unit came up huge in Saturday’s win, impacting the game from the very opening kickoff. With SMCC set to receive, Pirate wide receiver Kaleb Stamps forced a fumble that Pirate defensive back Nathaniel Lyken recovered at the Corsairs’ 31-yard line for a turnover. The OCC offense made good use of the advantageous field position with new starting quarterback Baylor Ayres, who received the starting nod Saturday night over the previous starter Brandon Cannella.

“We’re just trying to get a spark and get the team going,” Gonzalez said of the quarterback change.

With Ayres under center, the Pirates scored quickly, as Ayres scrambled for a 21-yard touchdown on the third play of the drive, his first of 5 touchdowns on the night. A missed extra point opportunity left the Pirates with a 6-0 lead.

The Corsairs moved the ball down field swiftly on their first possession, as Santa Monica quarterback Forrest Brock converted multiple first-down passes to get the ball into the red zone. An offensive holding call along with multiple Pirate defensive stops forced a long 4th down conversion attempt for the Corsairs, but an OCC pass interference penalty on the goal line allowed the drive to continue. Brock and the Corsairs capitalized, as Brock punched it in the end zone with a 2-yard rushing touchdown, and the extra point made it a 7-6 Corsair lead. Brock carved up the Pirates defense on the drive, going 6 for 8 for 65 passing yards on the drive along with 6 rushing yards and a touchdown, but it would be Santa Monica’s only scoring possession of the game.

Coast would answer right back with another big special teams play, this time a 59-yard kickoff return from receiver Kaden Baptista to set the Pirates up at the SMCC 29 for their second drive of the game. The Pirates drove down to the goal line in six plays and Ayres found Stamps from the 6-yard line for his first passing touchdown of the night, and just like that, the Pirates had scored two offensive touchdowns without having to run a single play from their side of the field.

The OCC passing offense was a balanced attack with Ayres at the helm, as he spread out his 18 completions on the night to ten different receivers.

“I just have 100% trust in my receivers that they can go get the ball,” Ayres said. “Everyone played great today and I’m just so happy we got this done.”

OCC’s defense was able to force the first punt of the game on the ensuing Santa Monica drive, but the team’s special teams luck seemed to run out as Stamps muffed the punt return, which allowed SMCC defensive back Jarius Thurman to recover the ball at the OCC 20. With a chance to tie or take the lead, the Corsairs offense was forced into a three-and-out, in what might have been the most important defensive stop for the Pirates in their win Saturday. Santa Monica elected to go for it on fourth down, but OCC linebacker Johnny Brigandi came off the edge and forced a turnover on downs with a huge sack for the Pirates.

Coast ended the back-and-forth first quarter with a 13-7 lead, and it would remain that way for the majority of the second quarter as both defenses started to lock in. However, with a little over 3 minutes left in the half, Pirate running back J.P Segura busted out a 30-yard rush by breaking several tackles to set up a Coast red zone opportunity.

“We had a very solid week of practice going in,” Segura said. “The offensive line is definitely clicking a lot better.”

Segura had a season-high 119 rushing yards and a touchdown on 17 attempts in the game, and added 49 yards in the passing game on five receptions.

Ayres would finish the drive off for OCC with an 18-yard touchdown pass to tight end Max Difilippo in the right corner of the end zone to go up 20-7 with 2:25 minutes left in the half. Hungry for their first win, the Pirates did not take their foot off the gas with the quarter winding down, as they swiftly forced a punt and drove the ball into Santa Monica territory again. The Corsairs’ pass rush was consistently able to force Ayres out of the pocket, but he excelled in throwing on the run, which he did for an 8-yard touchdown pass to tight end Glenn Atkins with 19 seconds left in the half. Ayres would finish his starting debut 18 for 25 for 205 passing yards and three touchdown passes, along with eight yards and two touchdowns on the ground.

“It’s not just about me, it’s all about the other guys,” Ayres said. “It’s the o-line, the receivers, the coaches and the play calling. It’s good to have those numbers but it wouldn’t happen without the other dudes.”

With the late score, OCC took a 27-7 lead into halftime and never looked back.

The Coast defense shut out the Corsairs in the second half. Meanwhile, backups for the Pirates offense started to see the field after the second Pirates drive in the third quarter. Ayres finished his night scoring on a 1-yard rushing touchdown to give OCC a 34-7 lead in the third, and Segura put on the finishing touches in the fourth quarter with a rushing touchdown of his own to seal the 41-7 victory.

Now 1-3, the Pirates will look to build off of this win in their road matchup next Saturday against the 3-1 Mt. San Jacinto College Eagles.

“Just keep the momentum going,” Ayres said. “We’ve got to do what we did last week in practice and just carry it on week after week, and if we do that, I think we could do some good things for sure.”