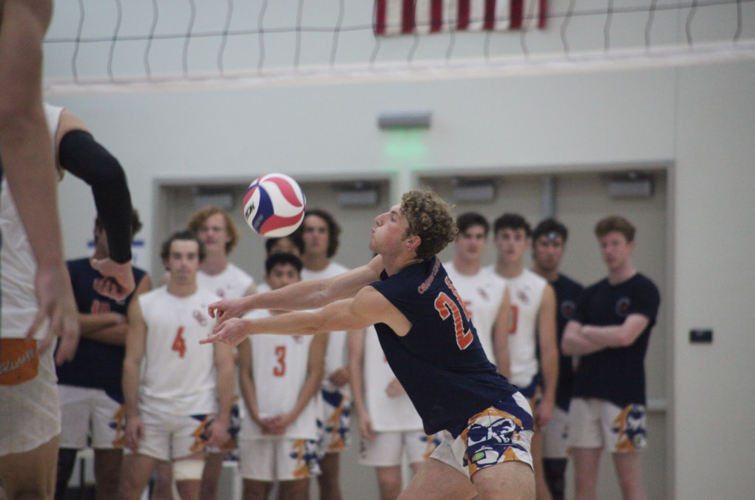 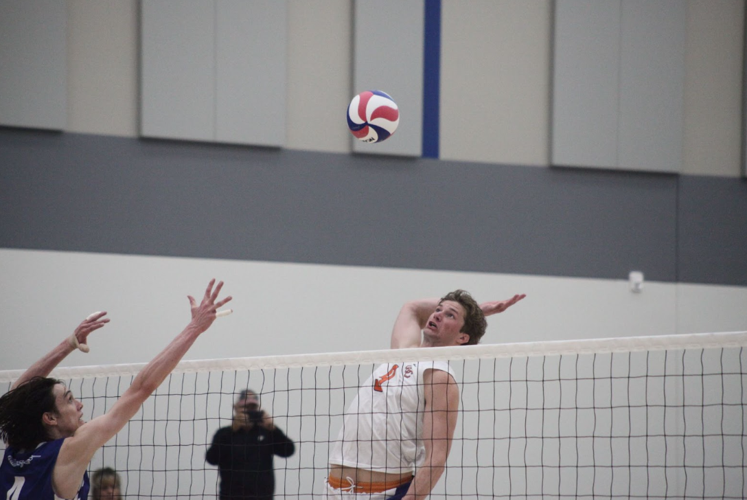 OCC sophomore opposite Will Anderson loads back for a kill against Irvine Valley College on April 21. 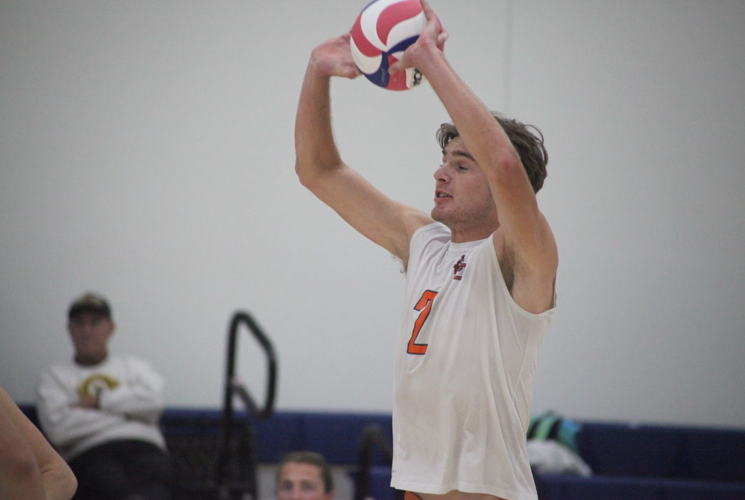 Pirates freshman outside hitter Cash Adamsen sets for his team to return against Irvine Valley College on April 21.

OCC sophomore opposite Will Anderson loads back for a kill against Irvine Valley College on April 21.

Pirates freshman outside hitter Cash Adamsen sets for his team to return against Irvine Valley College on April 21.

Orange Coast College men’s volleyball just had to be themselves on Thursday, sweeping Irvine Valley College 3-0 in the CCCAA State Championship Semifinals.

With the win, the Pirates tout a 9-0 record in sets against the Lasers this season, but more importantly, punch their ticket to the state championship finals against Long Beach City College on Saturday.

“We were just never worried,” OCC sophomore opposite Will Anderson said. “We know how good we can be.”

The 2019 state championship runner-ups began their night with a 6-0 run, before leading as much as 10-4 in the first set.

“That was just emotion on their part. They just came out of the gates hot,” OCC head coach Travis Turner said. “We just responded to what they did. Sometimes, teams don’t respond, but these guys have responded all year.”

A three-point streak from the Pirates forced a Laser timeout, allowing the Orange Empire Conference champions to find their rhythm.

“I think that timeout really helped,” OCC freshman opposite DiAeris McRaven said. “We got back into our groove and started playing. From there, it was history.”

After a season-defining offensive stand midway through the first set, OCC freshman middle blocker Zach Weston forced an error on the IVC front, and Coast tied the game at 17-17.

From that point, OCC benefited from some unforced mistakes, including two service errors that put the team ahead 21-14.

Coast flipped the script in the second set, using a few scoring runs to take the lead early, 14-9. The driving force behind the Pirates’ attack was freshman outside hitter Cash Adamsen, who hammered down eight points, including seven kills through the first two sets. The 6-foot-6 OH finished with 11.5 points, nine kills and five digs.

“Our game is to just get the ball in, keep the ball going, and try not to give any errors to the other team.” McRaven said. “Once we started doing that, we saw a big change and that’s when we started to really grow our lead.”

Coast kept just over four points of separation throughout set two, but a few service errors allowed IVC to strike as close as 23-19. Anderson’s sixth kill of the night set up a decisive kill for Adamsen on match point, and OCC took the second set by a score of 25-20.

Down 2-0 and without a lead since midway through the first set, IVC found itself in dire straits. With a win in sight, Coast still kept up the intensity with a barrage of kills to sink all hope for the Lasers.

With a 25-15 win in the final set, the Pirates clinched their first state championship appearance since 2018.

Coast will go toe-to-toe with Long Beach City College — the only program to take the Pirates to five sets this season. The Pirates split the season series against the Vikings, 1-1, with each team winning on its home court in five sets.

The two juggernauts will take their talents to a neutral site, El Camino College, for a 7 p.m. game on Saturday.

“We played them to a five-setter in the third game of the season, and we didn’t have our starting center,” Adamsen said. “He was out with food poisoning, but we got to five and it was so close. I really want to get that win over them.”