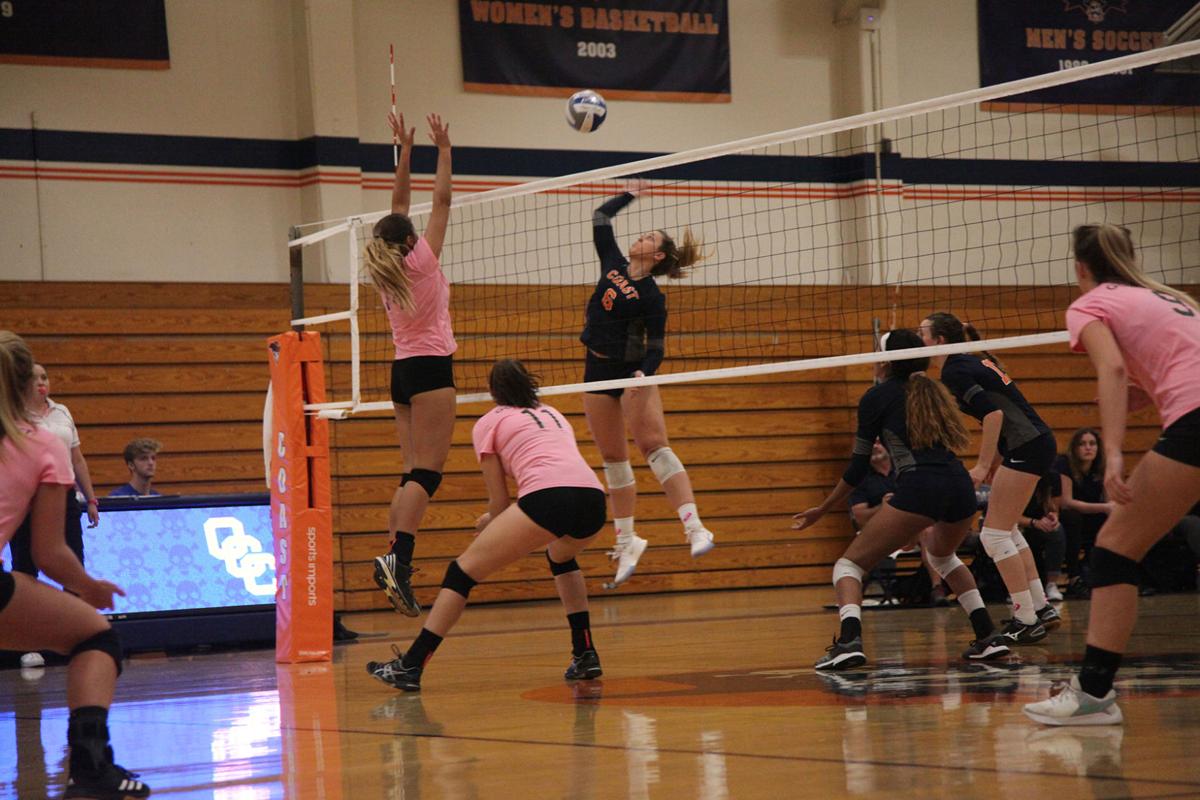 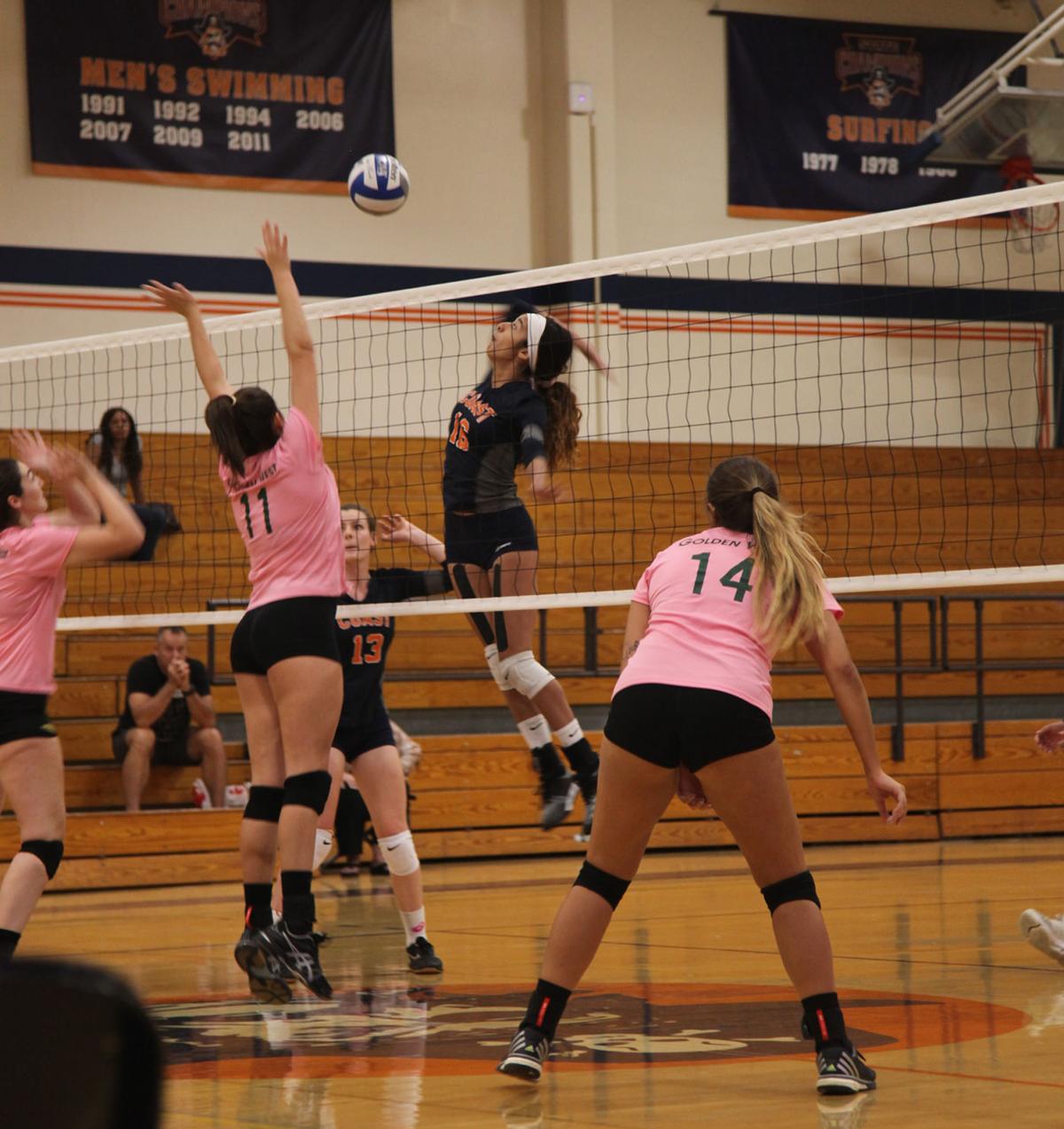 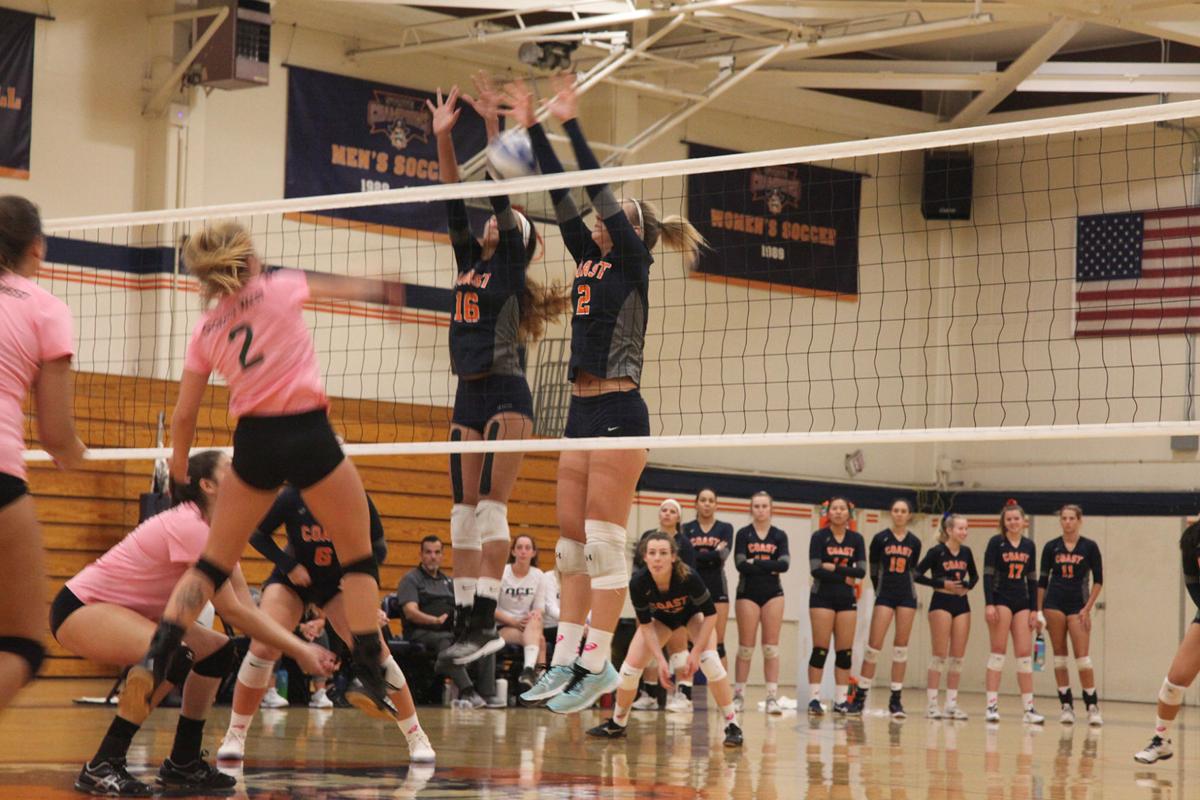 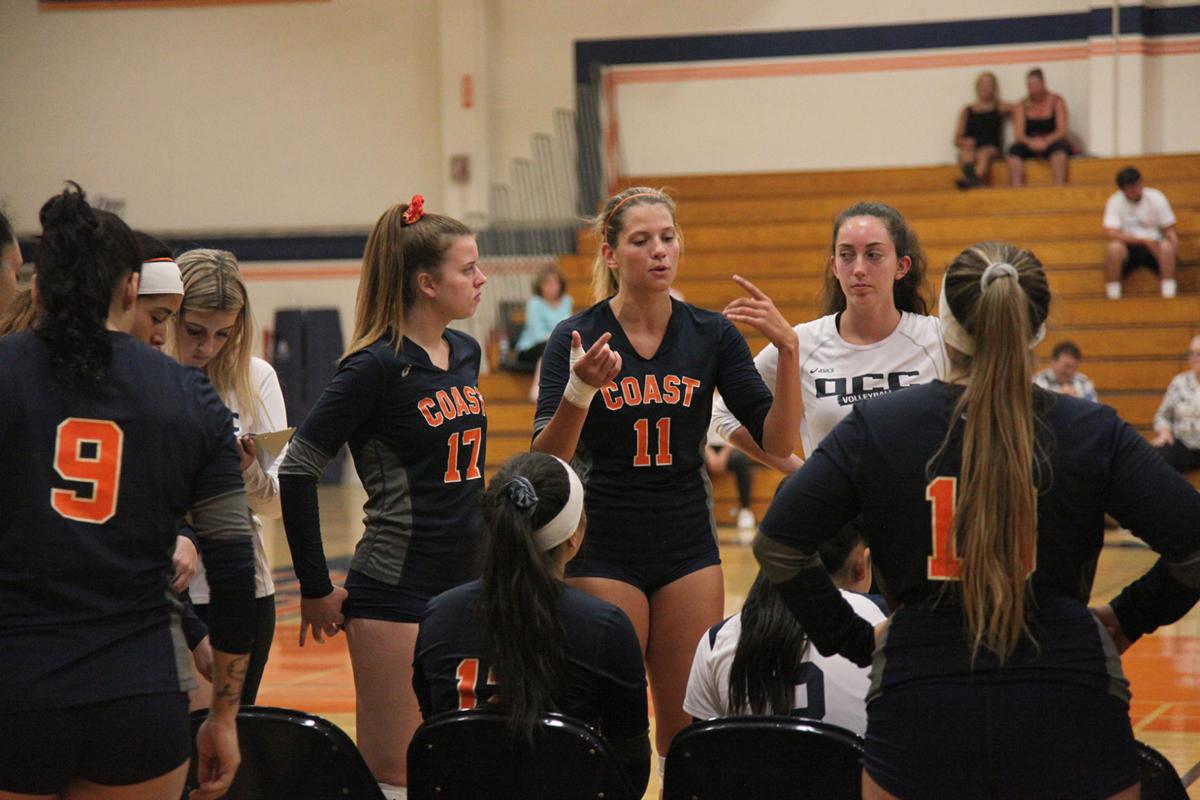 Lily Johnson, sophomore middle blocker (center), talks to her team in between sets during Friday's loss against Golden West College. 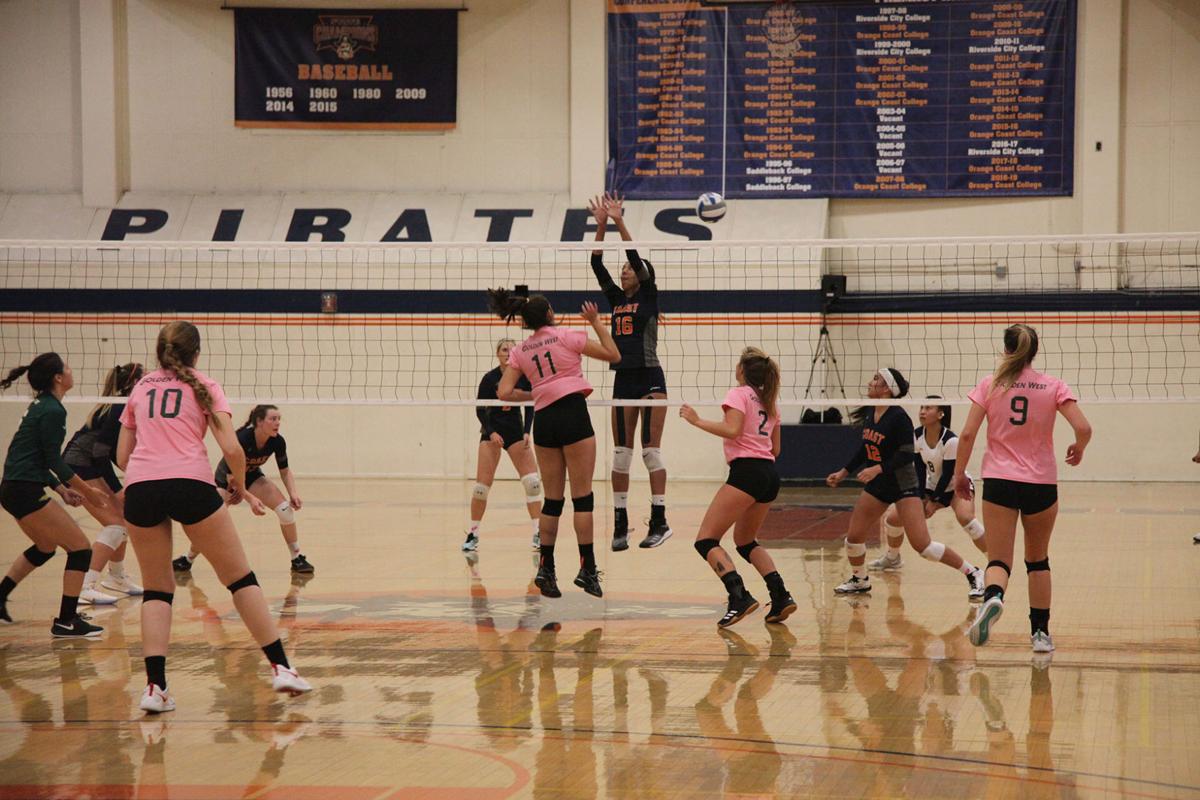 Lily Johnson, sophomore middle blocker (center), talks to her team in between sets during Friday's loss against Golden West College.

The match between the two rivals was the second and final time for the season. In the two teams’ first meetings, Orange Coast routed the Rustlers in three straight sets. GWC entered the match with revenge on its mind, and completely overwhelmed the Pirates.

“It was like we were seven different players on the court and not like a team, and that’s why we lost,” freshman outside hitter Lucrezia Lualdi said. “They [Goldenwest] didn’t beat us, we beat ourselves.”

Even though it was a home game for the Pirates, most of the gym held fans for the Rustlers, which sparked life into the team.

“We definitely didn’t play the way we usually play,” freshman outside hitter Lualdi said. “The level of energy we had tonight was very low.”

The only time the Pirates flashed signs of brilliance was the second set, where they jumped out to an early 9-1 lead. The hits that weren’t falling started to fall, silencing the pro-GWC crowd.

Lualdi led the offense and defense for the second set, and the entire match, with six kills and 13 digs.

Freshman outside hitter Mahina Kenoi led both teams with 15 kills. Freshman setter Thea Snider had a team high 32 assists, and to compliment that, provided 16 digs.

Golden West succeeded in silencing sophomore outside hitter Bailey Coffin, who is fourth in OEC play in kills, making her a non-factor in Coast’s offense.

Frequent miscommunications between the players on the court hurt Coast, often standing around watching as the ball fell in between the players. In the first set, frequent hits that sailed out of bounds put the Pirates backs against the wall.

Following two consecutive time outs called by head coach Chuck Cutenese, OCC finally got on a consistent groove, cutting the deficit back down to three points. However, the Rustlers rallied right back, preying off the faults of the Pirates, and picked up a well-deserved first set victory at 25-17.

“We couldn’t really be a team, and that’s what we need to be in our second stage of the season,” Lualdi said. “Our defense was not working today, and we couldn’t communicate.”

Of the other two sets OCC dropped, they seemed identical. The team would quickly fall behind, and then once it received the ball back, the team couldn’t continue a rally big enough to come within striking range.

When the Pirates defeated the Rustlers earlier in the season, the team was without freshman opposite hitter Sierra Emil. Emil proved to be a decisive factor in the matchup Friday, being the leading player for the Rustlers on offense, with 14 kills.

With frustration running at an all-time high, Lualdi and middle blocker Lily Johnson continuously attempted to motivate their team to get back into the game — to no avail.

Cutenese, frustrated with his team’s effort, refused to speak to the press following the game.

With more than half of the Orange Empire Conference play over, the Pirates are clinging to its third-place position, falling to 7-3 in conference play.

“We need to do more drills, like passing and sideouts, basically everything that was lacking today,” Lualdi said.

The Pirates will play a crucial game against second place Fullerton College tonight on the road. When the two teams faced off in September, Fullerton crushed Coast in three straight sets.

The team will return home Friday when they take on Santa Ana College in the gym at 6 p.m.