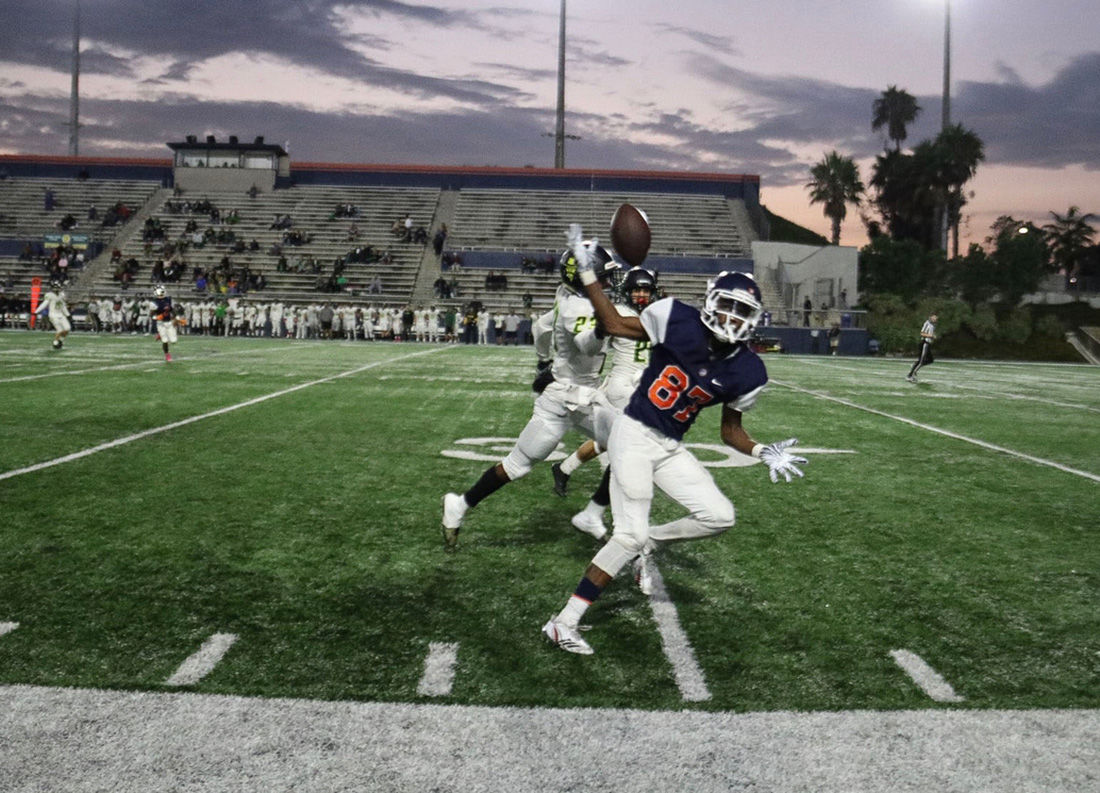 Demondray Purnell, wide receiver for the Pirates, attempts to recover the ball after being tackled by Syrus Collins, defensive back for Golden West College. 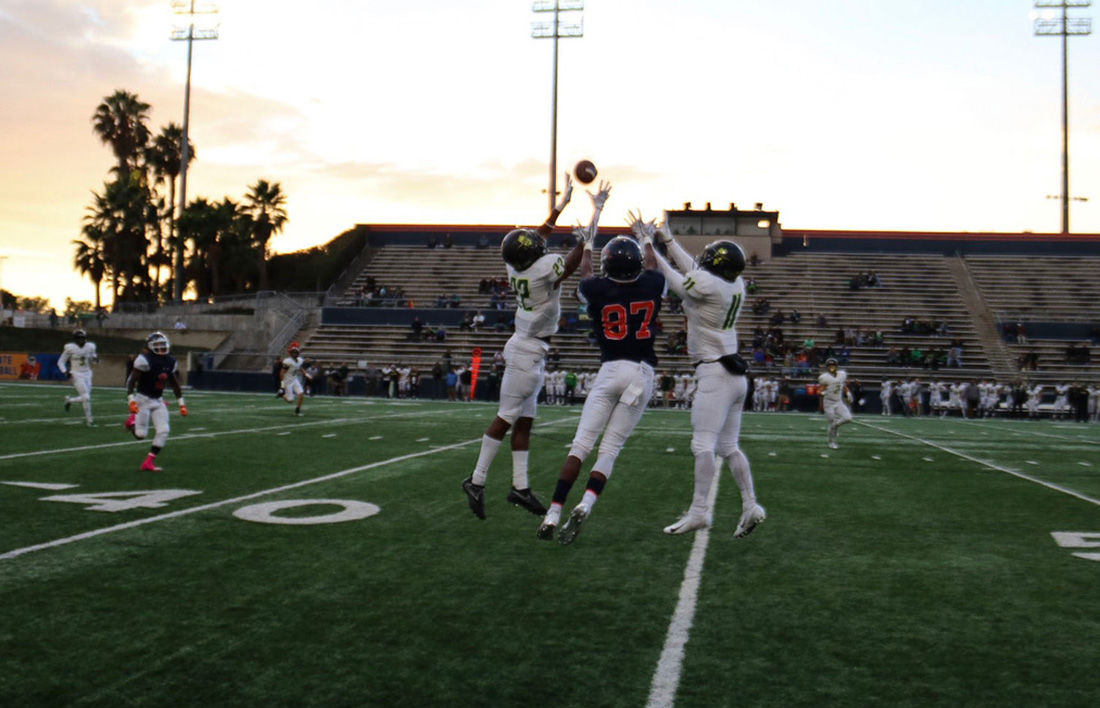 Demondray Purnell, wide receiver for the Pirates, attempts to recover the ball after being tackled by Syrus Collins, defensive back for Golden West College.

The Orange Coast College football team held on for as long as it could but couldn’t compete with rival Golden West College in Saturday’s Battle of the Bell, falling 24-10 at Dick Tucker Field.

Sophomore quarterback Pete Mitchell found his team sitting on a crucial fourth down on the Golden West seven-yard line late in the first quarter. Mitchell then used the entirety of his six-foot-four frame to move past the whole defensive line of the Rustlers earning a critical first down, on the six-yard line.

Two snaps later, Mitchell would scramble his way into the end zone setting up a seven-point lead — the Pirates’ only advantage of the game.

All season the Pirates have depended heavily on their running game and Saturday was no different, accumulating 175 yards on the ground, and only 91 in the air.

“We were moving the ball really well, we had multiple opportunities,” head coach Bubba Gonzalez said. “It’s not like we played a bad game, we just didn’t capitalize on certain opportunities.”

Golden West’s quarterback, sophomore Beau Kalbacher carved up the Pirate defense, throwing for 207 yards including a game tying 35-yard touchdown pass that sucked the life out of the fans in the stands.

Though the Pirates allowed Kalbacher to have gone 17-29 in the air, they did everything they could to stop the Rustlers ground efforts. The Pirates only allowed 69 rushing yards.

“Defense has played really well all year,” Gonzalez said. “They have an attitude that they’re going to come out and fight. They have the champions mentality that they’re not going to lose.”

With five minutes to go in the game and OCC trailing 24-10, the Pirates turned to sophomore running back Dadrian Ellis who started the Pirates’ drive with three separate rushing plays, collecting 28 of his 77 yards. As the drive continued, Mitchell marched his team down the field, in hopes of keeping the game somewhat in reach.

That came to a screeching halt when Mitchell was sacked for the third and final time, then fumbling the ball away and into the arms of a Golden West defender to secure the game for the Rustlers.

Heading into the third quarter down only three, the Pirates defense earned a punt for its team, and after two failed rushing attempts by Ellis, Mitchell was faced with a crucial third down with 10 yards to go. Mitchell took the snap and was brought to the ground while he was in the middle of throwing, but ended up fumbling the ball away, and Golden West’s V.J. Malo recovered the ball — but in the end zone to push the Rustlers lead to 10.

With just four games left in the season, the pressure is on for the Pirates to even be in contention for the league championship, with games against first place Riverside College looming in the distance. On Friday, the Pirates will head to Mission Viejo High School as they take on Saddleback College in their second conference game.

“I told the guys we’re going to take it one game at a time,” Gonzalez said. “They played their hearts out today, and we’re going to regroup and come out ready to go against Saddleback.”