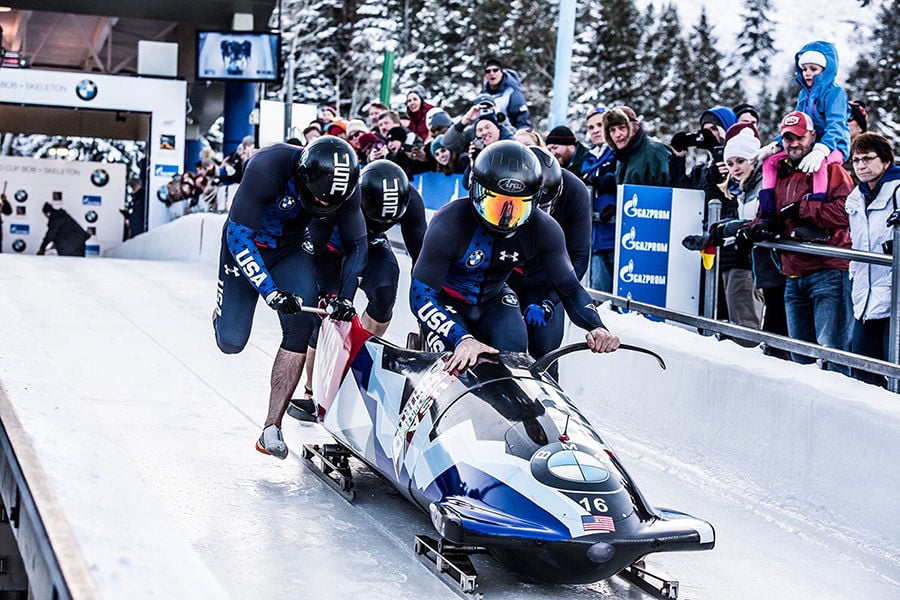 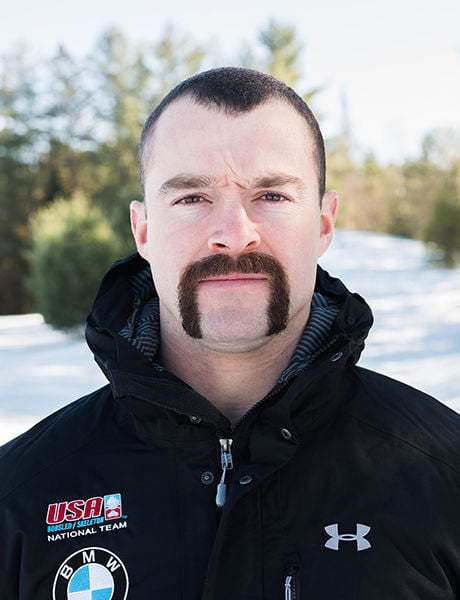 For most kids growing up in picturesque Newport Beach, if dreams of Olympic gold medals are at play, they typically include a sport where balmy temperatures and cloudless skies set the stage. For Carlo Valdes, however, Olympic greatness is dependent on the one thing that Orange County cannot offer — ice.

Valdes is quite literally attempting to push his way to gold medal greatness as a pusher for one of Team USA’s two 4-man bobsled squads. As one of 12 southern Californians representing Team USA in the 2018 Pyeongchang Olympic Games, Valdes is the sole male bobsledder in a cast of hockey players, snowboarders and figure skaters.

“It has always been a childhood dream of mine to compete at the highest level in any sport I was in, whether it was football, basketball, track, you name it. Never did I think I would be competing in the sport of bobsled as an Olympian,” Valdes said in an email from Pyeongchang.

Valdes said his very first Olympic appearance has been unforgettable. And his event doesn’t even begin until Friday.

He had heard previous Olympic athletes describe how breathtaking the Opening Ceremonies were, but nothing could prepare him for the moment he stepped out with the U.S. Olympic Team into Pyeongchang Olympic Stadium donning red, white, blue and a heaping amount of pride to kick off the 2018 Games.

“Walking into the Olympic Stadium in Pyeongchang is a moment that I will never forget. It was a packed house and the whole world was watching on TV which is a pretty cool feeling,” Valdes said in an email. “It was such an exciting and exhilarating experience and I couldn’t be prouder in that moment.”

As the world watched, Valdes couldn’t help but revel in the splendor of it all. Watching North Korea and South Korea walk out under one flag ranked as one of the highlights of the night for Valdes.

Valdes, 28, spent his youth much like any other Southern California native. He grew up playing tackle football and continued on with the sport catching passes for future Arizona Cardinal quarterback Matt Barkley at Mater Dei High School.

He took his athletic excellence on to UCLA, playing football for a year before joining the Bruin track and field team. It was through Valdes’ old coach, former UCLA director of track and field Mike Maynard, that Valdes segued into bobsledding.

“My transition to bobsled from football and track was actually a lot smoother than I thought it would be. Speed and power is what bobsled is all about when it comes to pushing these big and heavy sleds as fast as possible. Football and track gave me those tools,” Valdes said in an email.

It wasn’t just Valdes’ athletic abilities that Maynard saw potential in, however. While Valdes possessed the natural gifts of speed and power, the bread and butter of bobsledding, it was his drive and dedication that really sealed the deal, Maynard said.

“There are more people who are strong and fast than there are those who are strong, fast, and driven to succeed,” Maynard said. “Carlo is uniquely talented physically but it’s really his character that makes him an Olympian.”

According to Valdes, it was Maynard who encouraged him to try out following his graduation from UCLA. Maynard had previously worked with other track and field athletes who completed the transition to bobsled successfully and had subsequently fueled Valdes’ fire.

Valdes’ combine appearance was fruitful. He experienced progressive success, earning an invitation to USA Bobsled Rookie Camp and placing among the top rookies. He worked his way up through U.S. National Push Championships, where all athletes including veterans are tested, with a broken toe, and did so well he earned a spot in the U.S. National Team Trials, where the national team is selected.

He was named to his first national team as a rookie in 2014 and the rest is Olympic history.

“I climbed from USA-5 to USA-3 to USA-1, which is the top team, in the same year. Crazy journey if you ask me,” Valdes said in an email.

Valdes went on to earn the Rookie of the Year in 2015 and was named to the 2018 Olympic team in January.

“Carlo worked his ass off for this opportunity, so I couldn’t be happier for him,” childhood and longtime friend Brett Hanrahan said.

Although Valdes’ strength and athletic ability speak for themselves, he brings out his own quirky secret weapon of intimidation in the form of his trademark handlebar mustache to add a little triumphant oomph.

“I bring the mustache out on occasions,” Valdes said in an email. “People love it and I use it as an intimidation factor. It’s all about the mindset and this look helps with that mindset.”

Valdes and his bobsled team begin training on the icy rollercoaster tracks of Pyeongchang’s Alpensia Sliding Centre today and official competition kicks off Saturday culminating in the gold-medal round Sunday.