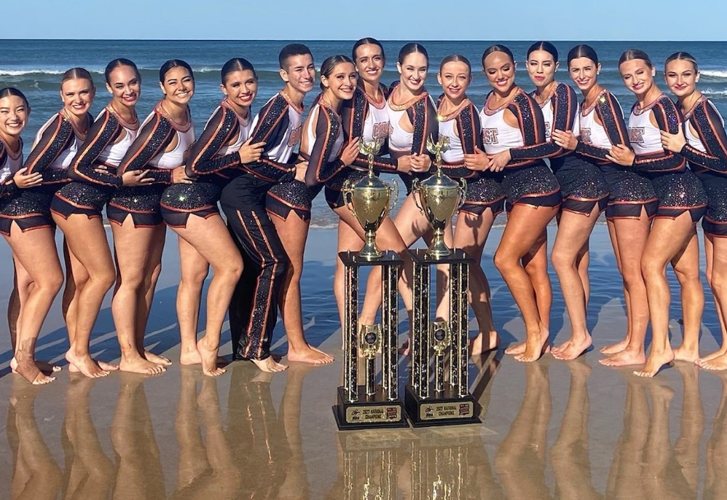 In a five month span, Orange Coast College sophomore and captain of the dance team Valeria Gonzalez went through hell and back — and her rebound included two of collegiate dancing’s most prized team awards.

The story of OCC dance team’s 2022 National Dance Alliance Championships in pom and jazz performances would be incomplete without the context of Gonzalez’s battle with thyroid cancer, and the squad’s valiant rally to support a friend and teammate.

The two-title run was a full team effort, galvanized by the hardships the team leader faced and the program’s will to win by any means necessary.

“We picked one song called ‘Game of Survival,’” OCC dance head coach Brittanee Roberts said. “It has more of a meaning now than it did when I chose the song. It was about losing a season to COVID, and then towards the end of the season, it became more about that fight for each other. It was about the fight for Val to persevere and push through what she was going through.”

Gonzalez’s cancer was brought to her attention in April 2021, while hanging around the dance team.

“We were at lunch, and they kind of pointed out my tumor to me because it was pretty visible on my neck,” Gonzalez said. “Then I had numerous doctor's appointments, and got surgery in December.”

In the nine months between the discovery and removal of her tumor, Gonzalez was still able to attend dance practices, even on the days where the team had morning and night sessions. At that point, she had no diagnosis for the bump on her neck, and was still having the abnormality examined.

Besides the bump, the team captain knew something wasn’t right when she started to feel emotional and energetic differences.

“It definitely caused depression and mood swings, weakness and fatigue,” Gonzalez said. “I was just mentally down for a lot of it, but since I am captain of my team, I never wanted that part to show because I didn’t want anybody else to give up.”

Gonzalez continued to prepare for a demanding dance season, bent on leading by example, but a few check-ins with the doctor led to the decision for the sophomore to have surgery to remove her tumor in December.

“We were scared,” Roberts said. “We were sad for her, but the thing with Val is she never wanted us to be sad for her.”

A tumor-less Gonzalez was welcomed out of surgery with the entire dance team waiting for her at home. The sophomore made it out with no complications, and with enough willpower to host her own team bonding event just hours after being released from the hospital.

“None of them missed it. They all made sure to make it there,” Gonzalez said. “[They] made sure that I was around people and never alone. I just took a little bit of time off, and then came back to practice almost immediately.”

Roberts also went the extra mile in being fully supportive of the accommodations her team captain needed last winter.

“She would text me everyday,” Gonzalez said. “I really think [Roberts] saw me as a daughter because she really went out of her way several times to make sure I was okay. She always let me take some time off if I needed to miss practice, and she never gave me a hard time. I mean, she is an angel.”

In January, Gonzalez’s diagnosis finally came through: the bump was in fact thyroid cancer. Additionally, the 20-year old was diagnosed with Hashimoto’s disease, an autoimmune disorder affecting the thyroid gland.

That same month, Roberts made the decision to pull the team out of the 2022 UDA College Championship.

“We had to push it to a different competition,” Roberts said. “I kind of made the decision as a coach that I knew she wasn’t going to be the healthiest in January, and my philosophy was if she can’t compete, then we’re not competing.”

Removing the UDAs from the equation left OCC with just one major dance tournament to fight for in the season: the 2022 National Dance Alliance (NDA) Collegiate Dance Championship.

Held in Daytona Beach, Florida, the NDA Championship was a massive event.

“There's tons of colleges there from all over the country,” Roberts said. “You’ve got people practicing outside, you've got music playing. Everyone is there to intimidate each other. Everyone's bringing their A-game.”

Still dealing with the side effects of her condition Gonzalez, along with the other 14 dancers on the Pirates squad, battled for two authoritative victories in pom and jazz performances. Coast won each event by around a three-point margin — an astonishing mark, especially at the national stage.

“It was a huge margin [of victory]. Usually, between first and third [place], you’re about half a point away,” Roberts said. “They just blew it out of the water. They came out with a fire and energy that I had never seen a team have before. This time it was just really special to watch — they were doing it for each other.”

After months of speculation, worry, doctor’s appointments, surgery and recovery, Gonzalez was able to hoist a national championship trophy from an event she was able to fully participate in.

Being the team captain she is, all credit went to her teammates and coach:

“I feel like I wouldn’t have been able to do it without my team, just because everyone is so dedicated and persistent,” Gonzalez said. “It showed me that I needed to do the same and not let them down, because when one person goes down, it's kind of like everybody else goes down.

Gonzalez still requires some blood work and scans to get a definitive answer on the state of her cancer, and she says those results are expected sometime in June. Regardless of the uncertainty of the cancer and day-to-day struggle of Hashimoto’s disease, the team she led became national champions in her final year at OCC.

“It was going to be my last time dancing ever, so I made sure to be able to compete and end with a bang,” she said.