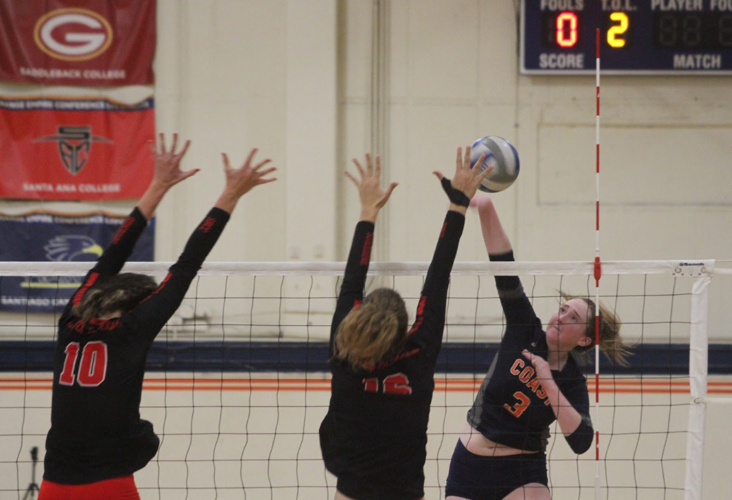 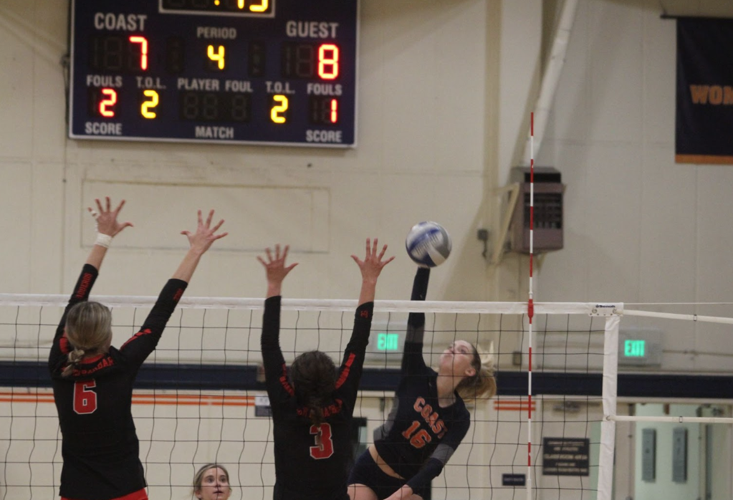 With the fate of its season on the line, the Orange Coast College women’s volleyball team clinched a trip to the State Championship Tournament on Saturday with a thrilling 3-2 home victory over Santa Barbara City College.

The No. 5-seeded Pirates surprisingly received a second home playoff game in the Southern California Regional Playoffs after the No. 13-seeded Vaqueros upset No.4-seeded San Diego Mesa College to reach OCC in the final round. With the win, the Pirates will now advance to the eight-team State Championship Tournament at Fresno City College to try and claim their first state title since 2009.

“My adrenaline is going crazy, I’m just so hyped that we pulled this out,” OCC sophomore outside hitter and leading scorer Brisa Zapata-Reaves said. “I knew we could do it the whole time, it’s just crazy that it became a reality.”

As the state tournament will be held in Fresno, eight Pirate sophomores, including Zapata-Reaves, played their final game at home at Orange Coast College on Saturday.

“It’s bittersweet,” Zapata-Reaves said. “It’s sweet that we won. It’s bitter that it’s the last [home] game but we just have to focus on the positives and moving forward and getting that ring.”

The underdog Vaqueros set the tone for an extremely tightly-contested match from the very beginning. Both squads traded blows evenly to start the first set, as they found themselves tied at 17. The Pirates started to pull away late with a 7-1 run to give themselves a set point opportunity, in large part due to Coast sophomore outside hitter Emma Honea, who had two of her five first set kills in the run. However, Coast could not put the Vaqueros away despite the six-point advantage, and SBCC roared back with a timely run to tie it at 25. SBCC sophomore opposite Caroline McCarty was dominant in the set, as she racked up four kills and three blocks, and led the charge as the Vaqueros rallied to take it 28-26.

“After the first set I told them, ‘This late in the season, a good team doesn’t give up at 24-18, but that’s over and let’s look forward to the next set and settle down,’ and we played well and we finished it out,” OCC head coach Chuck Cutenese said.

Both squads remained neck-and-neck with each other in the second set, with neither team holding a lead of over four points for its entire duration. As the set wound to a close, the Pirates trailed 24-23 when freshman outside hitter Leah Thibault nailed a pair of clutch aces to prevent a 2-0 deficit. With a set point opportunity, the Pirates tied the match at 1-1 after an attack error from McCarty.

In the pivotal third set, the Pirates seemed to turn a corner as they raced out to a commanding 14-3 lead. Honea, who missed a large part of the regular season due to injury, continued to shine in the biggest game of the year as she added four kills and one block in the set. Honea finished the contest with 13 kills and two blocks.

“It’s honestly just so good to be back on the court with my team again and we dominated,” Honea said.

The Vaqueros continued to demonstrate the resiliency you would expect from a No. 13 seed playing in the final round of the SoCal Regionals, as they cut the Pirates lead to 18-13. However, Coast managed to hold on to take a 2-1 lead after a kill from Honea sealed the set 25-20.

Teetering on the brink of defeat, the Vaqueros gave OCC their best shot in the fourth set. After being tied at 7 early, SBCC went on a surging 10-3 run to take a 17-10 lead and never looked back. McCarty continued to build on an impressive playoff performance, as she tied the contest at 2-2 with a set point kill to win the set 25-18. The sophomore Vaquero finished the match with a team-high 16 kills along with five blocks and two aces.

After nearly two hours of highly contested volleyball in the Peterson Gymnasium, it all came down to the fifth and final set. The two teams tied seven different times in this final stretch, demonstrating once again how evenly matched both programs were. The story of the finish was a battle between both squad’s top scorers, as Zapata-Reaves and McCarty both turned in clutch fifth-set performances with four kills each.

“I hoped that we would get Brisa into the front row at the end and we did and that was huge for us,” Cutenese said. “You’ve got to go to your strength and to your best player and it proved to work for us.”

Tied at 11, Zapata-Reaves nailed back-to-back blistering kills down the middle, and sophomore middle blocker Paige Cutwright soon followed with a block to give OCC a match point opportunity at 14-12. McCarty scored for the final time in the contest to bring SBCC within one, but then made a fatal service error that sealed OCC’s 3-2 victory.

“I’m just proud of my team,” Zapata-Reaves said. “We all really came together and we did this for each other and so it just feels really good.”