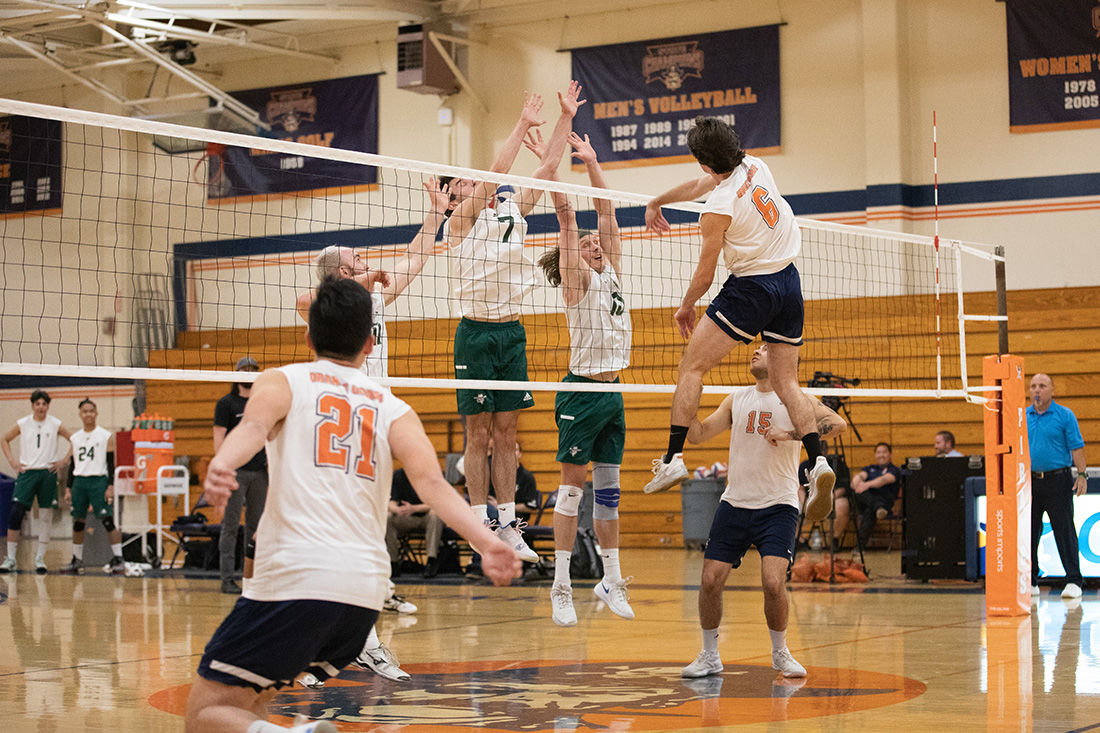 Jake Loudenbeck (No. 6) goes for a kill during the Pirates’ game Friday night. The team will face Santiago Canyon College Wednesday as they try to extend their undefeated season. 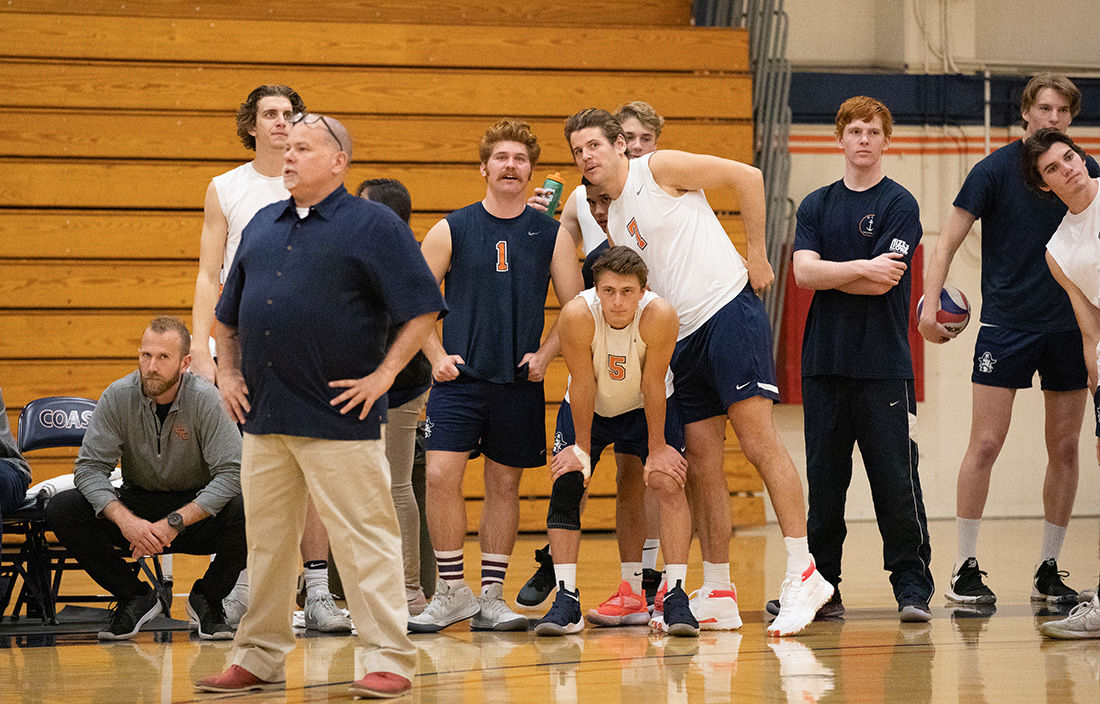 Teammates and coaches look on as the players took their 14th consecutive win on Friday. 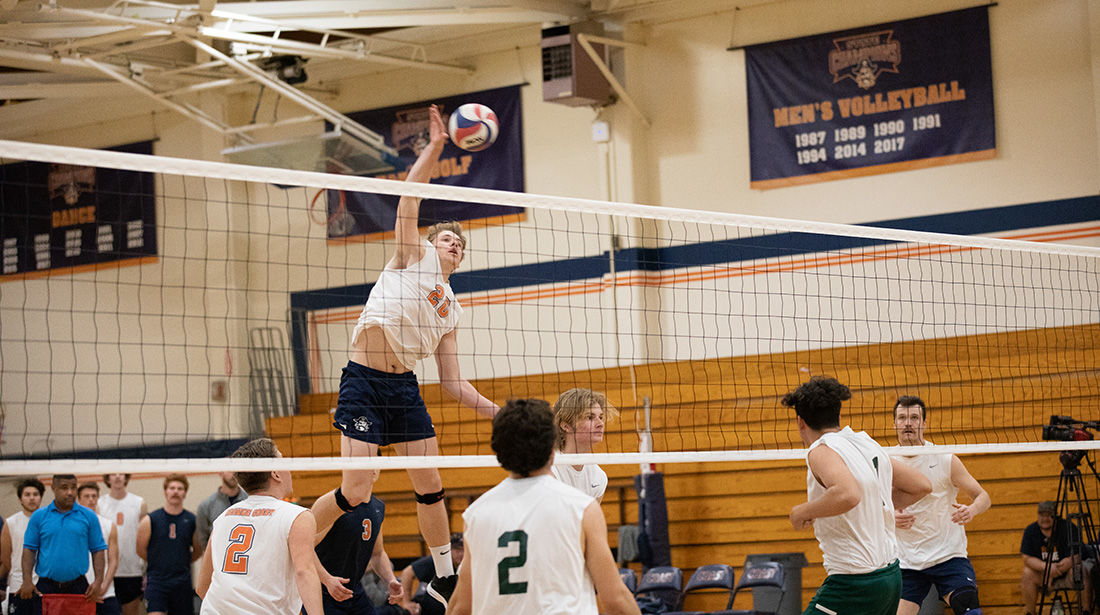 Jake Loudenbeck (No. 6) goes for a kill during the Pirates’ game Friday night. The team will face Santiago Canyon College Wednesday as they try to extend their undefeated season.

Teammates and coaches look on as the players took their 14th consecutive win on Friday.

Heading to Santa Barbara Community College with an undefeated record, the Orange Coast College men’s volleyball team hung on to continue its 15-game winning streak in a five-set thriller Saturday.

A non-conference rematch of the Southern California Regional playoffs showcased the Santa Barbara Vaqueros playing with a newfound vengeance and intensity, after a four-set defeat by Coast sent OCC to the State Final Four. After Coast jumped out to a controlling two-set lead, SBCC battled back, forcing the Pirates to a decisive fifth set, which OCC won handily 15-9.

Head coach Travis Turner voiced his concerns heading into the match, citing how much of a bad matchup the two teams were and praising Santa Barbara’s team as a whole.

Having dominated the Rustlers in two matches last season, the Pirates continued its success, winning the match in three straight sets.

“Obviously we are playing really well right now,” Turner said. “We’ve been really focused and worried about the next match. No one inside the group is really talking about how we’re undefeated.”

Friday’s match was dominated for the Pirates by freshman middle blocker Will Anderson, who had a match best nine kills, but also contributed on the defensive end with multiple solo blocks.

Opening the first set the Pirates took advantage of the Rustlers overpowering its kills, and went out to an early seven-point lead. Coast showed poise and was able to control the entire first set and Anderson sealed the set with a thunderous kill and immediately following the kill with a service ace to give the Pirates a 25-16 victory — in a dominating 19 minutes of play.

“We played well. It was a good chance to get some other guys some playing time,” Turner said. “I thought that they did a great job.”

The match against the Rustlers brought some of the best outside hitters in the state, with Coast’s own sophomore Kyle McCauley and GWC’s Matt Coleman. McCauley is averaging 3.09 kills per set, ranking fourth in the state.

Turner attributes the key to the early season success from strong leadership, guiding what he calls a healthy mix of both new and returning players. That mix of players are eight freshmen and nine sophomores.

Golden West attempted to keep the match close, but the strong hitting of Coast proved to be too much, by the third and final set, OCC quickly got out to a 22-7 lead. The Pirates benefited from success while serving, when freshman opposite hitter Matthew Gemeinhardt had two consecutive service aces find the corner of the court.

Getting past the OCC middle blockers has proven to be challenging, with Jake Loudenback leading the Orange Empire Conference with 1.62 blocks per set, which is second best in the state.

“We have to keep doing what we’re doing and not make a lot of adjustments,” Turner said.  “As long as we’re attentive and our effort is good, I think we’re in good shape.”

Turner is primed and ready to take his program to its third straight State Championship appearance but don’t be surprised to see the team stop there. He credits work in the offseason is the key to what gets his teams in the best shape to make a deep run when the playoffs begin.

“You win or lose that match in April in the fall,” Turner said. “It’s all about how hard you work to make sure [losing] doesn’t happen again.”

With six conference matches left before the playoffs, Coast will return to conference play on the road tonight against Santiago Canyon College and will return home on March 27 as they take on Fullerton College at 6 p.m.