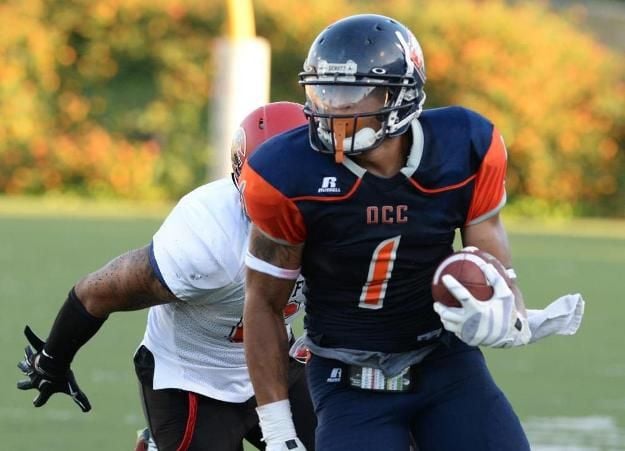 Mark Munson, a skilled journeyman receiver, is an essential piece of the Orange Coast College football team, who has proven his ability through his numbers so far this season.

Munson, a 22-year-old kinesiology major, leads the OCC football team in receiving, at 108.1 yards per game, a mark that ranks second in the Southern California Football Association Southern League. He also ranks third in receiving touchdowns with eight this season.

Munson is at the very least a journeyman.

Previous to Orange Coast College, he attended five other community colleges trying to find the correct fit for his skill set and what he wanted to do on the field.

Munson is a mixture of a deep-ball threat and a possession receiver, with games of high catch tallies and also a lot of yardage down the field so far this season.

According to Munson, he brings one particular quality to the team more than any other.

“Probably the big thing that I bring to this team is big play ability,” Munson said. “We thrive off big plays at the beginning of the game and if I can come in and make a big play, it sparks our team and helps our team play better.”

He attributes his success in leading the team in receiving to buying in and running his routes the right way all the time.

Munson also explained how important it is to have the correct timing with the quarterback and how working hard in practice allows him to get his timing down.

According to Munson, his improvement on the field this season is due to working hard over the summer to get better at all facets of his game.

“My success this season is due to just working hard over the summer over every little thing and getting better all around,” Munson said.  “It’s not one particular thing I do.”

Munson stressed that if he had to pick one reason he has been so successful, it is due to his high level of physicality this season.

Head football coach Kevin Emerson described the type of wideout Munson is and what qualities he brings to the team.

“Munson is a big, physical wide-receiver that can block, that can catch, and that can make yards after contact,” Emerson said. “He just makes plays.”

Emerson confirmed that Munson is a go-to target and they feed him the ball as much as the team can get it to him.

He continued that even though he is a go-to target, they aren’t afraid to throw to other receivers if the defense double covers him.

“He’s got the speed and the strength and the ability not to get knocked over and tackled easily,” Emerson said. “And that’s the big thing: he gets a lot of yards after catch or yards after contact.”

Quarterback Kody Whitaker described Munson as having that “Munson juice,” which refers to his ability to make people miss and work his magic according to Whitaker.

Whitaker talked about how speed is a huge quality Munson has that allows him to be so effective.

“He gets the ball in his hands and he just goes,” Whitaker, 18, an undecided major said. “He sees patches in the grass and just hits them full speed.”

Whitaker first started throwing to him in week three and has had a great connection with Munson on the field since they started playing together.

Outside of football, Munson’s main interests consist of video games and studying.