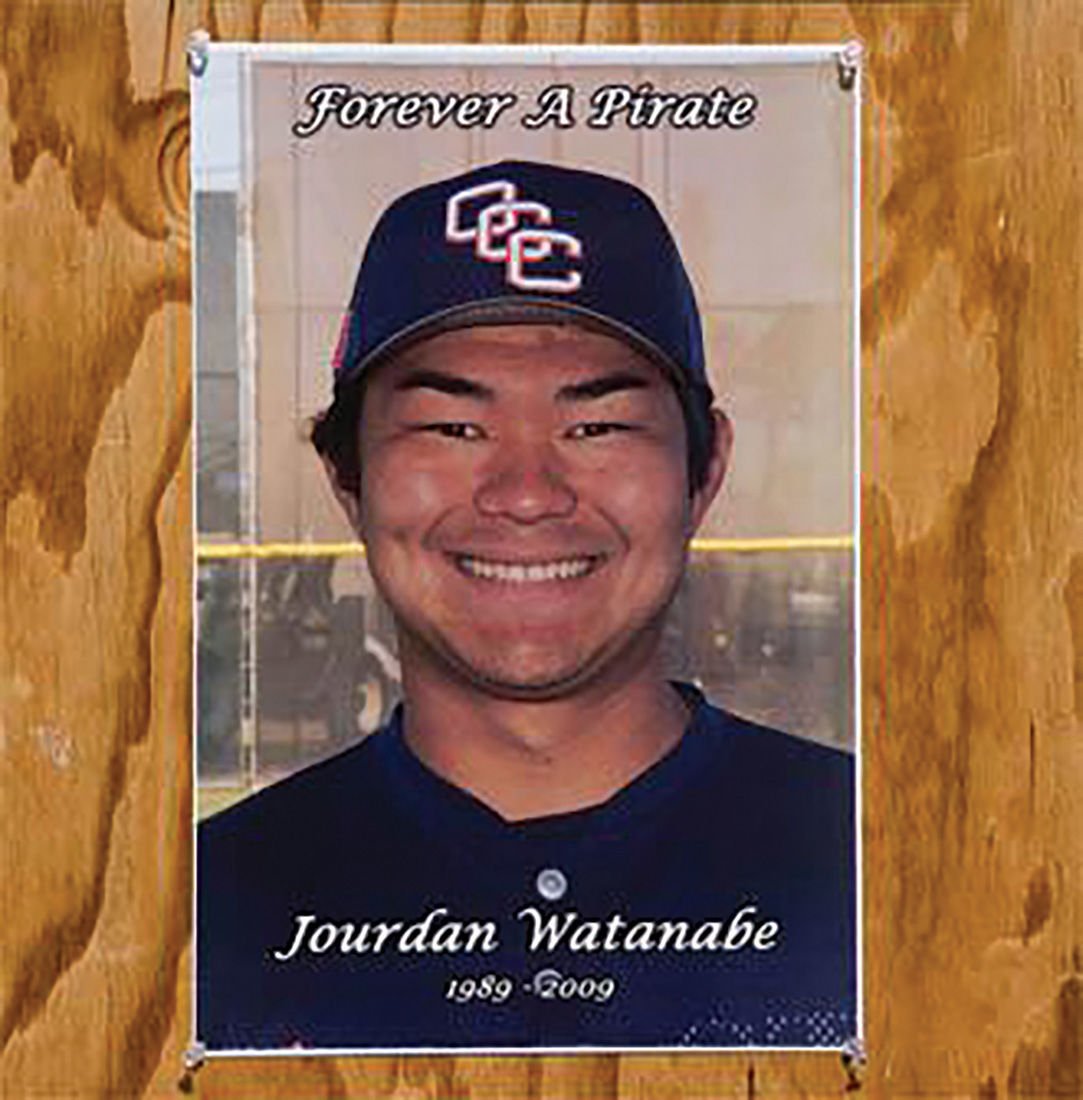 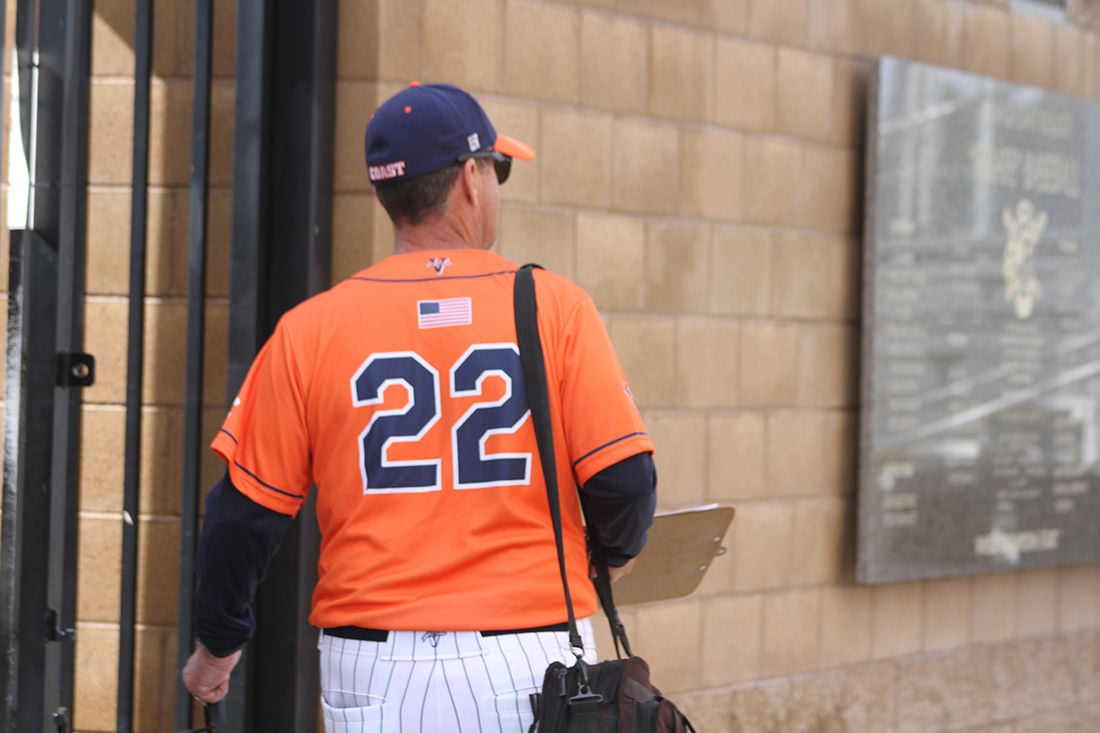 In the famed words of Babe Ruth in “The Sandlot,” “heroes get remembered, but legends never die.”

Those are true words for the late Orange Coast College baseball player Jourdan Watanabe, who in 2009 was a redshirt sophomore who unexpectedly died during the team’s season on Feb. 27.

In the 10 years since, every game and every season, OCC continues to honor Jourdan’s memory with flags, banners and his initials around Wendell Pickens Field.

Aside from being a stand out athlete, Jourdan is still remembered for his exuberant personality and leadership on and off the field.

“He was one of those guys that players would be attracted to because of his personality,” head coach John Altobelli said.

Jourdan was always messing with his coaches and teammates.  Altobelli remembers his smile and big personality that was always on display around the ballpark.

“When we lost him it was obviously the darkest day in my life as a coach,” Altobelli said.

After his tragic death, former teammates chose to think of happy memories while thinking back on Jourdan’s impact on their lives.

“When I think back and think about Jourdan it’s always positive,” Gabe Cota, former OCC catcher and teammate said.

In his freshman season, Jourdan caught and posted an impressive .353 batting average with seven home runs and 40 RBIs, which earned him top honors as a first team all-Orange Empire Conference player.

“As a baseball player he was one of the best I’ve seen,” Cota said. “He was pretty unbelievable as a hitter especially.”

Weeks after Jourdan’s unexpected death, his OCC teammate, Trevor MacDonald, was admitted into the hospital with a flesh eating bacteria.

Later in the season OCC hit the trifecta after Altobelli was suspended because of three ejections he collected while arguing with umpires during games. He was unable to coach in the later part of the regular season and was ineligible to coach during playoffs.

After the emotional season, the 2009 OCC baseball team went on to dominate in the state championship tournament and brought the ring back to Costa Mesa for Jourdan.

It was Altobelli’s first of three state championships, and OCC’s first since 1980.

Altobelli now plays a slideshow about that team, how they faced adversity and overcame to win the championship.

He plays it at the beginning of the season for his players, or whenever he sees his team needs a wakeup call.

“After we show the video and we talk about it, every guy gets up and gives Kent (Jourdan’s dad) a hug. It’s really cool,” Altobelli said. “It’s pretty powerful. It hits home with them.”

Since his son’s death, Kent Watanabe has been a continual presence within the baseball program.

Kent Watanabe started volunteering in and eventually ran the snack bar for OCC home games. A few years after a stroke that left him disabled, he was brought on as a volunteer hitting coach. He now keeps the scorebook in the dugout.

Every time the baseball squad goes to the playoffs, Kent Watanabe brings his son’s jersey and it’s been included in each of the three state championship pictures OCC has brought home.

It brings Kent Watanabe joy talking about and remembering his son whom he lost too early. He is reminded of his son through his old teammates who keep in contact with him.

Cota, a former OCC baseball player and Jourdan’s teammate in 2007-2008, recalled Jourdan pushing him to pursue his now wife.

Cota met his wife while they were in high school, but didn’t seriously pursue her until he was at OCC.

“If it wasn’t for him I don’t know if my wife and I would be together,” Cota said.

Cota maintains that Jourdan pushed him to start their relationship.

Kent Watanabe was at Cota’s wedding and was told the story of Jourdan pushing Cota to ask his wife on their first date, which Jourdan attended as well.

Cota and his wife, Maria, have been married since 2013 and welcomed a daughter in 2017.

Altobelli and the Watanabes had a relationship before Jourdan ever stepped on OCC’s baseball field. In the 2000s the Altobellis lived about six houses down from the Watanabe family in Irvine. Altobelli could hear the dings of the Watanabe brothers’ bats as they hit soft toss in their backyard.

Back then, Altobelli knew he had to get Jourdan playing at OCC.

Altobelli has seen signs of Jourdan in everyday life in the 10 years since his death. Especially his number, 22.

Almost a year and a half after Jourdan’s death, while traveling to Eugene, Ore. to watch his son J.J. play baseball, the Altobelli family was on flight 1422. Both of the numbers have major significance to him — 14 is the number Altobelli wears when he coaches and 22 was Jourdan’s number.

Kent Watanabe happened to be in Portland at the same time. While there, he suffered a brain aneurysm and stroke. The closest “family” he had to him at the time were the Altobellis. They dropped everything and headed straight to Portland to be with him. They were told he might not make it through his brain surgery.

Altobelli believes the flight number was a sign from Jourdan for him to keep an eye on his dad. Jourdan chose Altobelli to be his family’s guardian angel in his place.

Before Altobelli’s heart surgery in 2011, he was placed in station 22 in the hospital. Again, seeing Jourdan watching over his surgery ensured everything went smoothly.

After men leave OCC’s two-year program at OCC, some move onto higher levels of baseball. Some players choose to change their number to 22 to honor Jourdan outside of Coast baseball. Jourdan may have been an Orange County boy, but his presence is being known all over the country with the spreading of Pirate players.

When Jourdan arrived at OCC, Cota was wearing number 22. When Jourdan wanted that number, Cota didn’t give it a second thought and gave the now sacred number away.

Whenever Cota goes to Las Vegas with his old teammates, he places bets on number 22. He hopes his connection with Jourdan can give him an extra push of luck to win the big jackpot.

The Jourdan Watanabe Baseball Scholarship was set up in honor of Jourdan to give back to the program that gave the Watanabes so much after their son’s untimely death. The recipient of the award is a player who is continuing his baseball career at a higher level and represents what Jourdan was as a hardworking and focused teammate.

“It’s not always the players with the top batting average or lowest ERA. It’s whoever Kent thinks is right and is the best teammate,” Altobelli said.

Last year, catcher Chris Ceballos, who transferred to Kansas State, had the honor of being recognized as the recipient.

According to the Irvine Police Department, police responded to a burglar alarm just after 1 a.m. on Jan. 27, 2009 in the 100 block of Musick Road where the officers found a bloody Watanabe inside a business with cuts on his wrist, arms and torso.

“His death is still a mystery. They don’t know what happened,” Kent Watanabe said. “That’s the scary part. We probably won’t know.”

To honor Jourdan’s memory and family in the 10th anniversary of his death, Altobelli is wearing Jourdan’s number 22 while coaching this season.

Since 2009, no player on an OCC baseball team has worn the number 22. In future seasons, Kent Watanabe and Altobelli will choose a player each season that embodies Jourdan’s spirit, leadership and love for the game to represent number 22.

Additionally, to honor the 10th anniversary of Altobelli’s first state championship, there will be a commemorative flag flying with Jourdan’s number 22 on it.

Kent Watanabe didn’t know about these tributes around the upgraded baseball complex until he showed up for practice after the renovations were complete. He saw his son’s initials, “JW” on the turf near the bullpen, and a new “22” printed on the left field wall.

He called his wife, Annie, and sent pictures to his brothers back home in Hawaii. He was so proud his son was continuing to forever be a part of the Pirate program.

During games, after announcer and Sports Information Director Tony Altobelli reads the lineup, Jourdan’s favorite songs play before each home game to let the guys know Jourdan is always with them.

He thanks Altobelli for continuing to honor his son, and credits him for helping him and his wife through losing their child.

“Without him [Altobelli] and his family, I’m not sure we would have made it through,” Kent Watanabe said.

Kent Watanabe has told Altobelli, “As long as you’re here at OCC, I’m here.” He is eternally grateful for the Altobelli family and all the sacrifices they have made to honor their son over the last 10 years and beyond.

For what would have been Jourdan’s 30th birthday in January, the Watanabes scratched their usual birthday party plans and celebrated Jourdan at his favorite place on earth, Disneyland.

Ten years later, his baseball family is still celebrating along with the Watanabes.

As the OCC baseball team plays on their own Field of Dreams, Jourdan’s spirit continues to take the field in every Pirate ballgame.