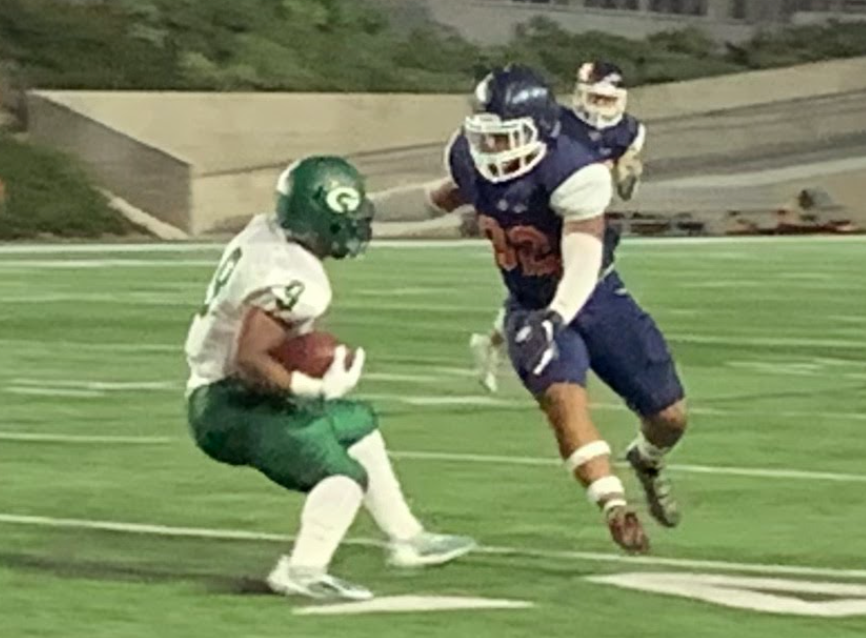 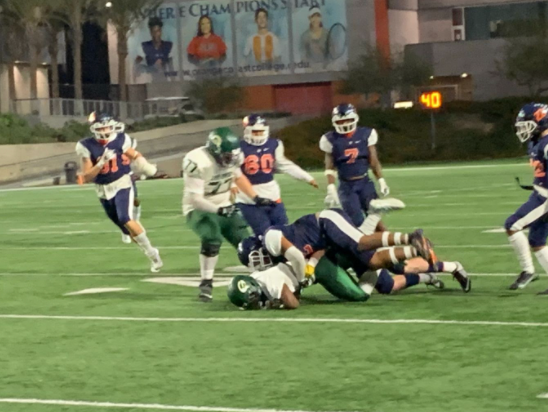 During Orange Coast College’s first three football games, the Pirates gave up only four plays of more than 25 yards. Giving up seven plays of that length or longer, OCC dropped a non-conference game to Grossmont College 54-23 at Lebard Stadium on Saturday night.

“We just tried to keep them in front of us,” OCC head coach Bubba Gonzalez said. “Unfortunately, we didn’t do a very good job pursuing the ball.”

Grossmont sophomore running back Treyvion Davies set himself up for a big night after rushing for a 4-yard touchdown to put the Griffins ahead 7-0 three minutes into the game.

Davies ended the night with 130 all-purpose yards and four total touchdowns — three of which came on the ground.

After the Pirates opted to kick an 18-yard field goal on a fourth-and-1 on the Grossmont one-yard line, the Griffins were given the opportunity to go up two scores early in the game. Wide receiver Chris Carter took a 55-yard reception up the right sideline for Grossmont’s second touchdown of the game, extending the lead to 14-3 late in the first quarter.

OCC was able to respond in the second quarter, when RB J.P. Segura-Queijeiro flipped into the endzone to cap off a 5-yard TD run. At this point, OCC only trailed Grossmont 14-10.

For most of the game, the Pirates ran their offense in a pro set formation, utilizing both Segura-Queijeiro and RB David Hernandez fairly evenly in the backfield. Hernandez led OCC with 93 yards rushing on 17 carries.

Down 21-10 late in the second quarter, the Pirates changed up their offensive scheme from pro set to single-set back. It would immediately pay dividends as WR Edwin LaCrosse hauled in a 20-yard reception with 3:40 left in the half, cutting the lead to 21-16 — the closest margin of the game since OCC’s first offensive drive.

Unfortunately for the Pirates, there was enough time for Grossmont to drive up the field and set up a 1-yard TD rush for Davies right before halftime. Both teams headed to the locker room, the score in favor of the Griffins 28-16.

The third quarter belonged solely to the Griffins, and more specifically, Davies. The sophomore all-purpose back scored on two huge plays: a 45-yard breakaway run and a 22-yard reception from Grossmont QB Brady Apt. After that play, the Griffins held a commanding 34-16 lead.

Despite a 22-yard pick-six from OCC defensive back Corey Sampson, the deficit was too far to overcome.

The big plays by the Griffins continued to absolutely kill OCC’s chances at a comeback. Grossmont added two more touchdowns and the Griffins left Costa Mesa with a 56-23 victory.

For the Pirates, the loss exposed some serious holes in the defensive secondary.