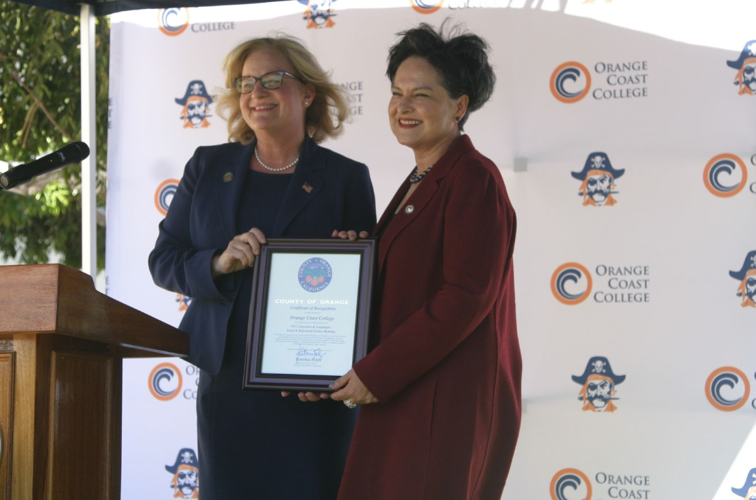 Orange County Supervisor Katrina Foley presented OCC President Angelica Suarez with a Certificate of Recognition from Orange County at the LLSS dedication ceremony on May 12. 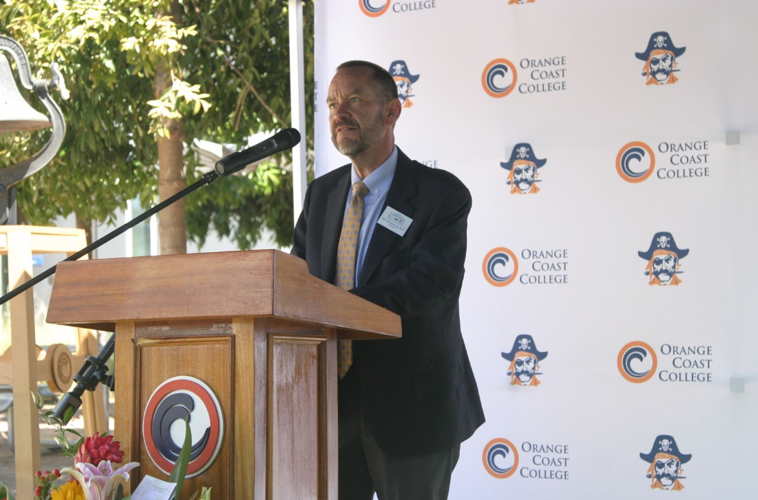 CCCD Chancellor John Weispfenning spoke about the importance of the work students are doing at the new LLSS during its dedication ceremony on May 12 at OCC.

Orange County Supervisor Katrina Foley presented OCC President Angelica Suarez with a Certificate of Recognition from Orange County at the LLSS dedication ceremony on May 12.

CCCD Chancellor John Weispfenning spoke about the importance of the work students are doing at the new LLSS during its dedication ceremony on May 12 at OCC.

Orange Coast College marked its fifth dedication ceremony with the ribbon-cutting of the new Literature and Languages, Social and Behavioral Sciences building on May 12.

The new building combines two divisions in the 100,000-square-foot building, featuring departments such as political science, psychology and philosophy, as well as special programs such as the award-winning OCC Speech, Debate and Theater team and Coast Report student newspaper.

“Seeing these two divisions come together in one building – that synergy with our students and that connection – is amazing,” OCC President Angelica Suarez said.

OCC history professor Brent Rudmann, is also excited about the new building and the new environment it brings to campus, especially with students and faculty returning.

“The upgrades are pretty astonishing,” Rudmann said. “When we have everyone together, it becomes not just a building, but a place and that’s the part we’re just getting to.”

Suarez took the podium and focused on the building’s symbolism of connecting disciplines and what it means for students on campus.

“This building has been intentionally designed to foster relations and build a community for our students,” Suarez said. “There’s an incredible synergy between the very diverse disciplines we have and the connection.”

“What we never could’ve foreseen at the time, is this building would welcome students back to campus,” Weispfenning said. Weispfenning spoke on how the LLSS building brought together three diverse disciplines: social science, literature and journalism.

“Perhaps no three disciplines shed a brighter light on who we are as a society or as a people, and perhaps no time in history has been as fraught for the future of democracy and freedom of the press,” Weispfenning said. “The work that happens here has that potential to launch tomorrow’s tellers of truth and advocates of justice.”

CCCD Board of Trustees President Mary Hornbuckle focused on thanking those who helped the district build the LLSS building.

“This building represents the investment our communities – the Coast Community College taxpayers, are making to the future,” Hornbuckle said. “The promise of tomorrow is why we construct academic buildings that will last for decades.”

Foley, an OCC alumni, spoke at the ceremony and presented Suarez with a Certificate of Recognition from Orange County.

“This campus has been transformed into a university-style campus,” Foley said. “These kinds of spaces where students have an opportunity to thrive and master what drives them [are] so important.”