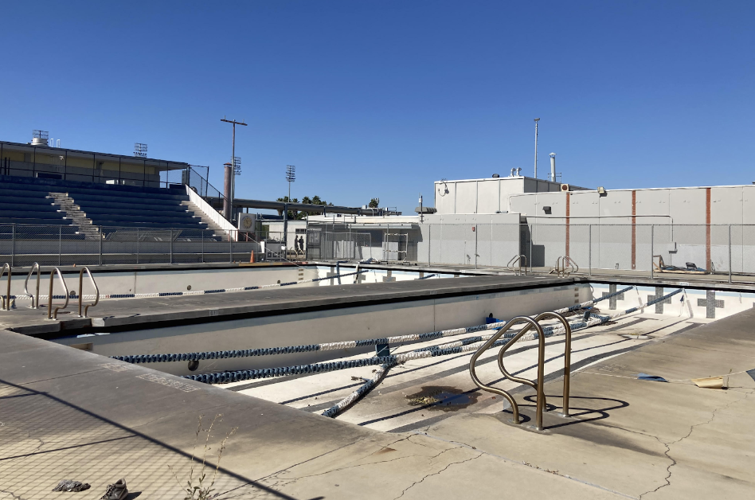 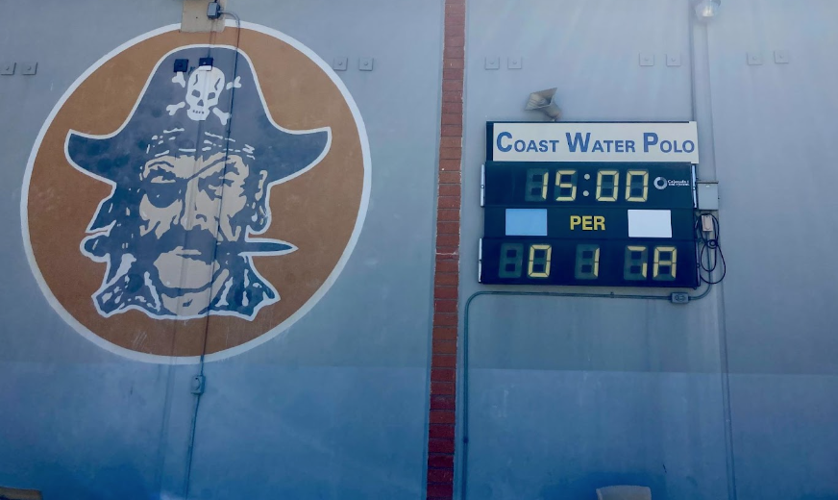 The scoreboard at the old pool complex still lit up in October 2022.

The scoreboard at the old pool complex still lit up in October 2022.

Anyone who has been to an event at the gym or shot some hoops next to the track since campus reopened may have noticed that the old pool complex sits abandoned. Even though the new Orange Coast College Aquatic Pavilion has been serving the campus since its completion in summer 2020, its predecessor has yet to be torn down.

The original pool complex was designed by the architectural duo, Richard J. Neutra and Robert E. Alexander. It opened on Nov. 19, 1953 with the men's water polo team playing a match against Fullerton Junior College.

The entire complex was built for a cost of $130,000. This included two pools, a high diving board and bleachers that housed the heating and pump system beneath them.

Whenever construction projects take place on campus there has to be a plan and funding first.

The original plan was to convert the space into a temporary parking lot. However, in a facilities planning meeting in September, the idea was proposed to build a sand volleyball court in that prime spot right by the other athletic facilities.

“Right now with our women volleyball players, we have an exceptional team. Great coaching out there,” Pagel said. “They have to go down to Huntington, which is not bad to go down to the beach, but you have to park down there and get around. Having a collegiate level facility dedicated to that sport, of women’s volleyball, here would be of huge importance to us. “

The demolishing of the old pool along with various other ongoing and upcoming construction projects are all part of a larger plan for the campus.

“We have had to hire an architect to develop demolition plans, which also includes rerouting existing utilities nearby,” project manager Rachelle Favis said via email. “We are now getting ready to bid the project, which takes some time since this will need to be publicly advertised. Those factors have pushed out the timeline for the demo.”

After nearly 70 years of continuous service, and a couple years in limbo, the old pool complex will be demolished sometime in 2023 over the course of approximately three months, according to Vice President of Administrative Services Rich Pagel.

The estimated cost of the project is around $1 million.

“Sometimes when you take out infrastructure, a pool in this case, there might be utilities running through that,” Pagel said. “So the architects have identified all that, and that's in the bid documents. Sometimes there's complexities around all this, so it does take some time.”

Over the course of the pool complex’s long life it was retrofitted multiple times to bring it more in the line with modern standards and keep it in service. However, it eventually developed cracks that were leaking water into the surrounding earth.

Pagel also noted that the old pool was not as accessible for all students, particularly those with disabilities.

“It didn’t always service the needs of our adaptive students, the students that are working with disabilities,” he said. “It didn’t serve well in those aspects. It served it, but not like our new pool does. It serves the students so much better.”

OCC’s Aquatic Pavilion has an adaptive pool, designed with features like swim ramps and pool lifts, to make the pool accessible to students with disabilities.

Other projects that are part of the facilities master plan include a telescope farm next to the planetarium, a new chemistry building where the current Literature and Language building stands, Recycling Center, Student Union and an expansion of the Maritime Academy.