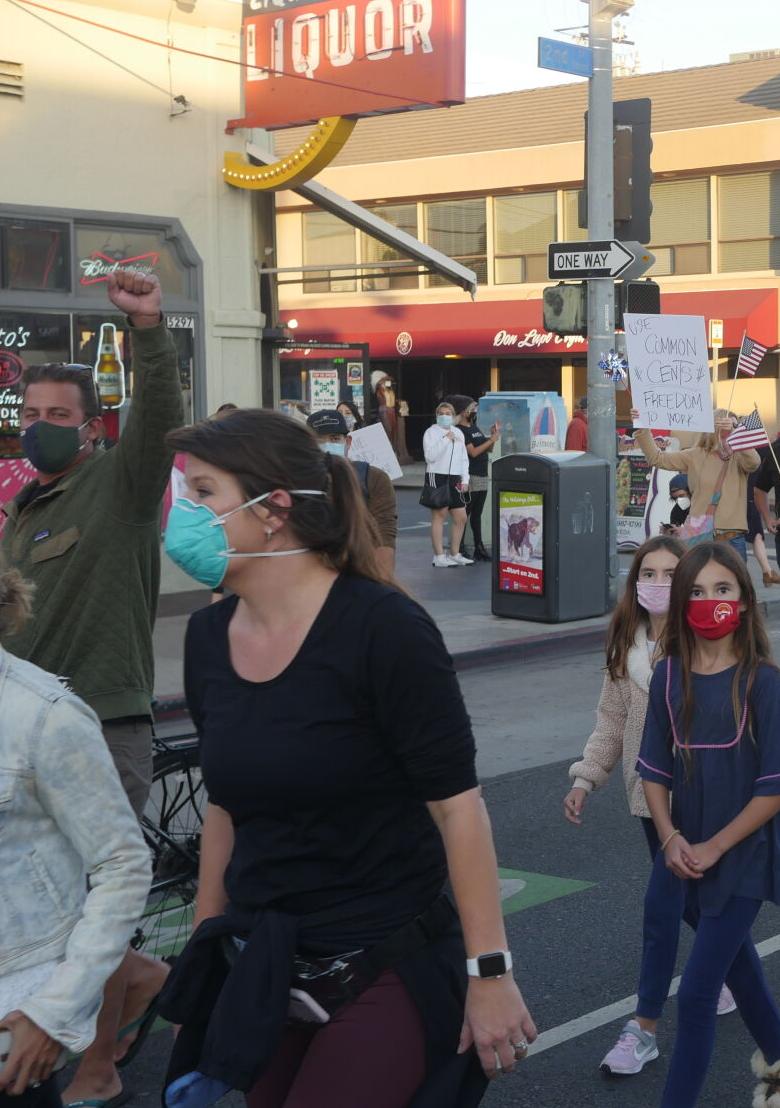 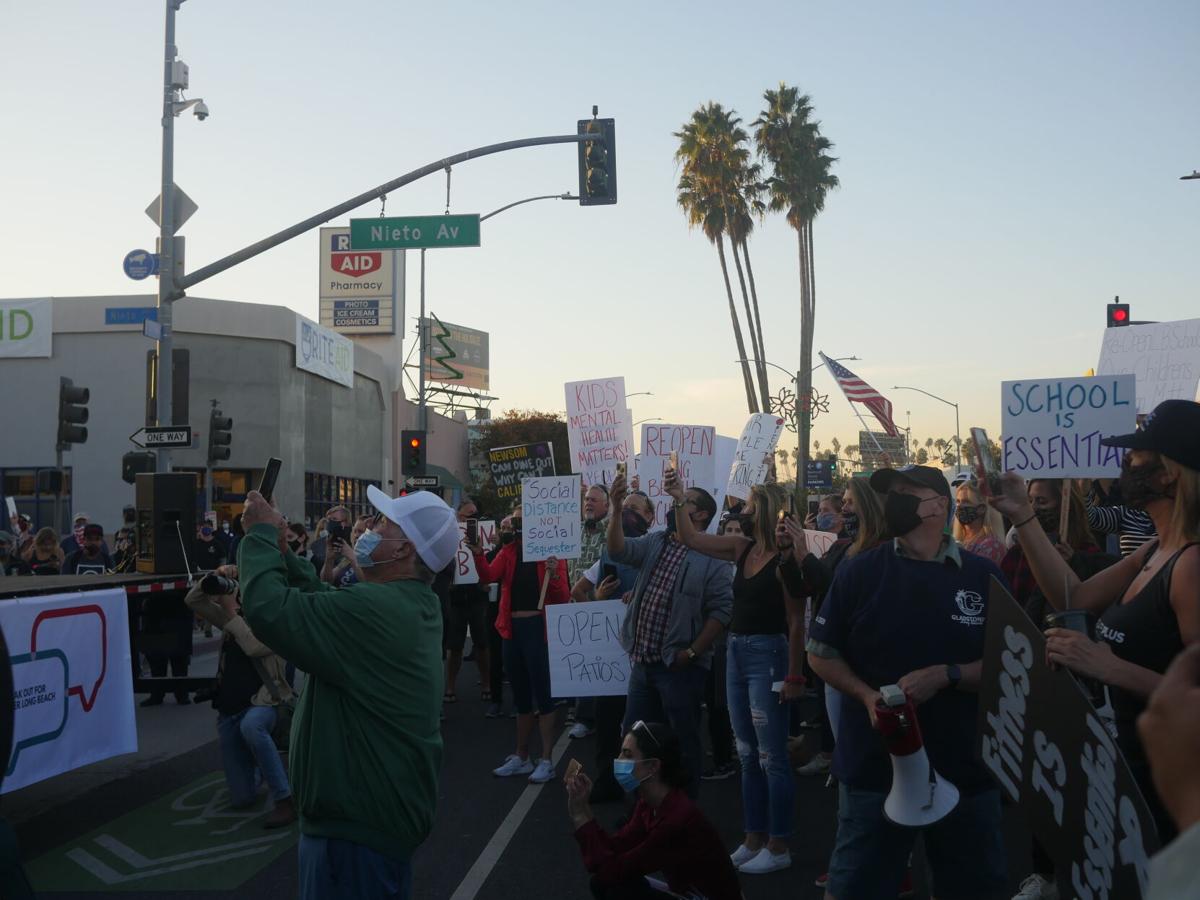 Protestors gather at 2nd Street and Nieto Ave. in Long Beach on Dec. 2 to hear speakers at a rally against LA County's latest COVID-19 orders. 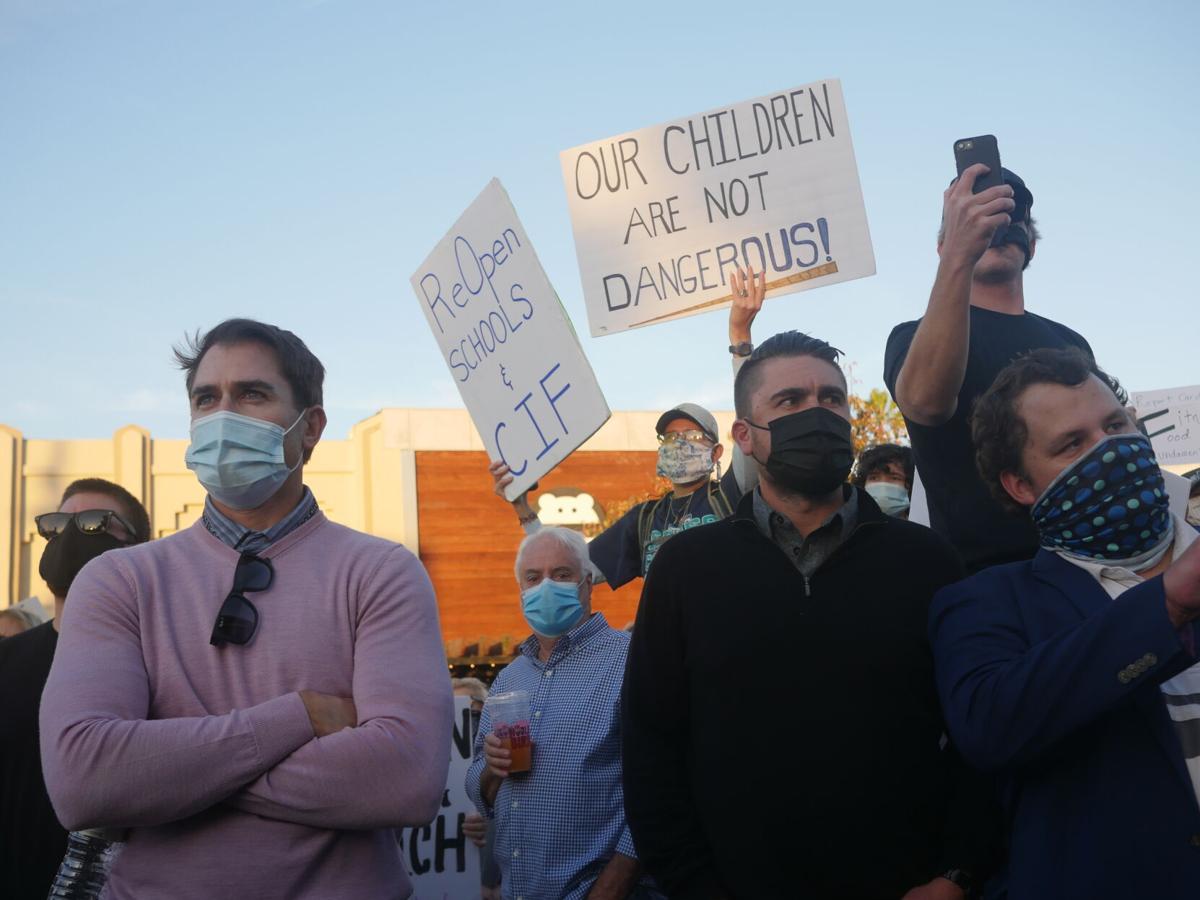 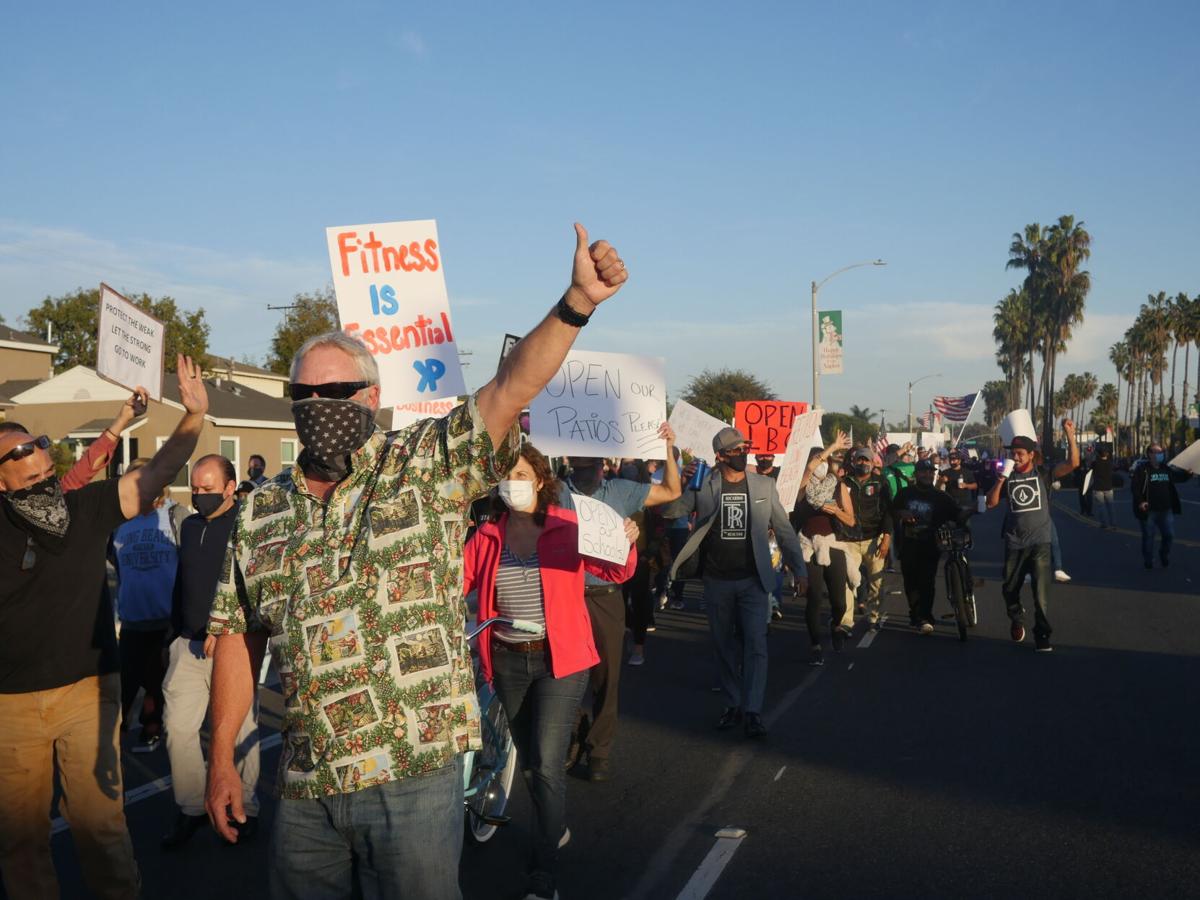 Protesters at a rally on Dec. 2 in Long Beach came from various industries to speak out against the LA County COVID-19 restrictions. 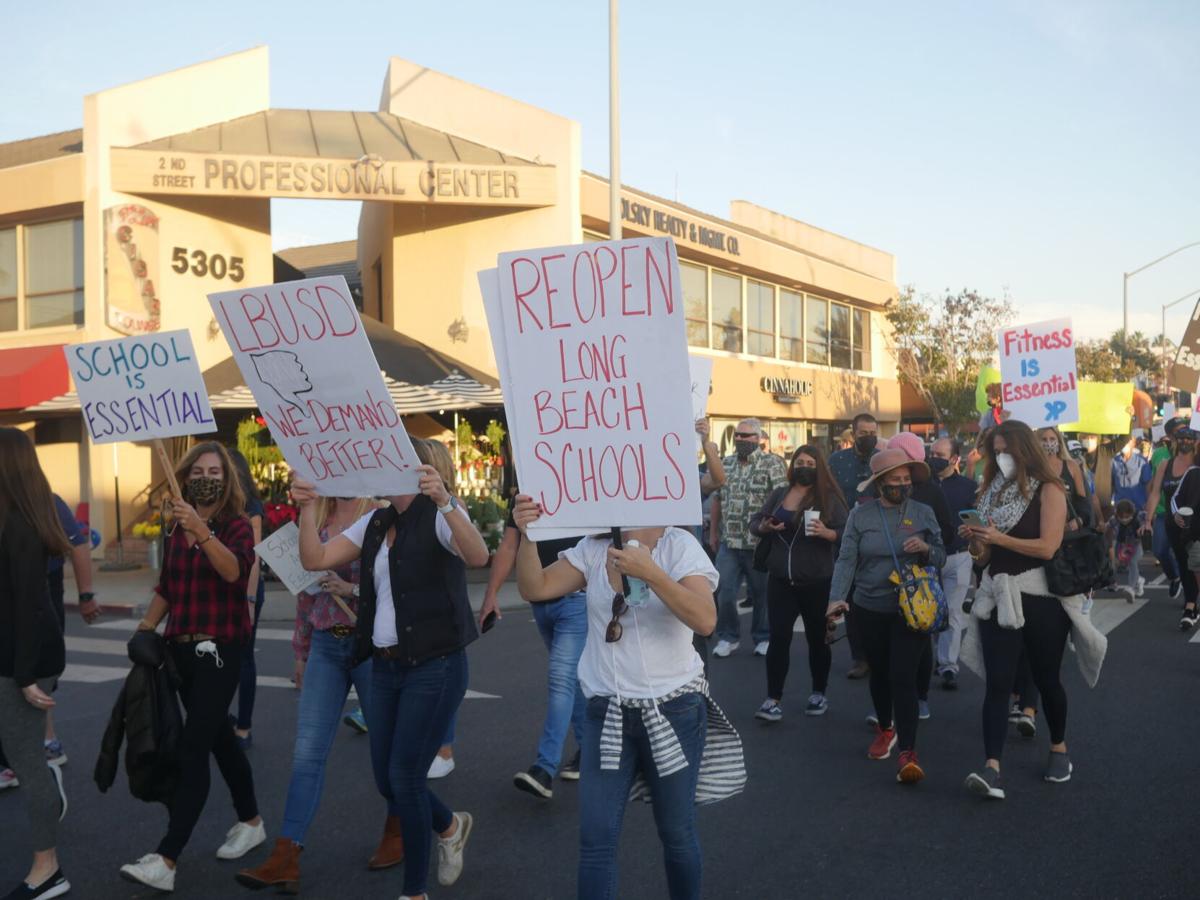 Children and schools were a central focus of marchers in Long Beach on Dec. 2 against LA County COVID-19 restrictions.

Protestors gather at 2nd Street and Nieto Ave. in Long Beach on Dec. 2 to hear speakers at a rally against LA County's latest COVID-19 orders.

Protesters at a rally on Dec. 2 in Long Beach came from various industries to speak out against the LA County COVID-19 restrictions.

Children and schools were a central focus of marchers in Long Beach on Dec. 2 against LA County COVID-19 restrictions.

About 300 Long Beach business owners and residents took to the street on Dec. 2 to protest California Governor Gavin Newsom’s latest round of COVID-19 restrictions and demand that schools be reopened immediately.

On the way, business owners, employees and residents gathered on the sidewalk and cheered them on. The march stopped in front of the Chase Bank in Belmont Shore where a rally was held.

At the rally several speakers took the stage to question the reasoning behind multiple COVID-19-related restrictions, including ongoing school closures and the recent ban on outdoor dining, specifically calling out Long Beach mayor Robert Garcia along with the Long Beach City Council.

“On March 13 our students got the devastating news that they would not be returning to school, and since that day it has been 117 days since any of our Long Beach students have set foot on campus. For those of you that don’t know — one school year is 180 days and our kids have not stepped foot on campus for 117 days,” said Brenda Durnin of the group Reopen Long Beach Schools.

“Our teachers have watched straight A students go to D and F. They have watched their passion and drive for school diminish. Feelings of isolation, sadness and depression start to weigh on our kids. We have a neighboring city — Los Alamitos, one mile away — go back to school, and our kids are wondering, ‘Why not us?’” Durnin said, as the crowd began to chant “Why not us?”

The Center for Disease Control’s COVID data tracker states that the number of COVID-19 deaths nationwide among the 5-17 year age group was 107 as of Tuesday.

Durnin noted that just last week, Dr. Anthony Fauci, the director of the National Institute of Allergy and Infectious Diseases, said that it was time to reopen the schools.

The protest was officially dubbed the “March to Save Small Business” by organizers Ryan Choura, owner of Choura Events, and Trent Bryson, CEO of Bryson Financial, and was hosted by the Accountability PAC, a non-profit organization seeking to promote accountability in local government.

Among the participants were restaurant owners and staff protesting the public health order imposed by Los Angeles County on Nov. 25 limiting restaurants to take-out operations only. They marched together in solidarity wearing company T-shirts and carrying banners displaying the names of their establishments.

Several chefs were visible in the crowd, some wearing their chef hats and uniforms. Among the signs were slogans such as “Let us feed our families,” “Small business is essential” and “86 Newsom.”

Many restaurants across the region were already hanging by a thread due to the previous executive order that shut down business operations in April during the early stages of the pandemic. Now they have another hurdle to climb and for many it may be insurmountable.

“We’re dining outdoors, we’re doing all the state’s protocols and above some extra cleaning tasks — extra wiping down, extra sanitizing — and we’re outdoors six feet apart. So, I don’t know how the restaurants are contributing to the coronavirus factor. There’s no scientific proof that us sitting outside, in an open-air dining experience creates more contraction of the coronavirus,” said Robert Duvall, executive chef and general manager of Long Beach restaurant Jade on the Water.

Due to the recent restrictions Duvall has had to lay off 95% of his staff and is currently operating with a staff of five.

As patios were shuttered and layoffs spread across the county, the California Restaurant Association and attorney Mark Geragos, owner of the downtown LA eatery Engine Co. No. 28, went to court.

“As we’ve repeatedly said, their order was arbitrary and targeted restaurants unfairly, without supporting evidence. This ruling doesn’t mean that outdoor dining can immediately resume in LA County, particularly since the county has since issued a stay-at-home order.  However, it’s our expectation that if the county is unable to produce evidence justifying this decision, then outdoor dining should be allowed to resume as soon as the stay-at-home-order is lifted, ” CRA President Jot Condie said in a Twitter statement.

Restaurants have been operating at 50% outdoor dining capacity and take-out only for the past several months, in accordance with a previous LA County order.

Many have found creative ways of adapting, including investing in additional outdoor dining spaces on city sidewalks in the form of parklets — build outs that convert sidewalks into designated dining spaces — but even for those that could make the conversions, it hasn’t come close to making up the difference in their balance sheets.

The irony of Governor Gavin Newsom being caught at a dinner party with lobbyists and two CA Medical Association executives at the Napa area restaurant The French Laundry just days before he imposed new restrictions on people gathering over Thanksgiving was not lost on those at the rally.

“Look at our democrats that are in office. Four of them just this last month alone did things that they said we shouldn’t be doing and they’re doing it themselves and you know what? It’s because they feel safe and know with their own conscience and their own free agency that they can make those decisions and we should be able to do it ourselves,” said Dana Tanner, owner of Restauration, a popular eatery in Long Beach.

Multiple protestors noted the hypocrisy of the patchwork approach across many different cities in Southern California. They also questioned the science behind LA County’s recent restrictions, which apply to Long Beach but not neighboring Seal Beach or Los Alamitos.

Pasadena, which is in LA County, also remained open because its Department of Health decided against the outdoor dining ban.

“The problem I see is that it’s uneven — Seal Beach is open, Belmont Shore is not. Some communities are able to make a living and others say no. To me it’s all about safe people, telling the people that are not safe what to do. They’re not losing their jobs. They’re telling these people ‘You can’t have your job. My job’s good — your job is not safe,’” said David Newell, retired high school history teacher and football coach who was among the protestors.

As of Dec. 6 the governor signed a new regional stay home order that divides CA into five separate regions, in which Orange County and LA County are now combined for the purposes of COVID related restrictions, the order is triggered whenever ICU capacity within the region falls below 15% and  requires specific measures to go into effect as of 11:59 pm the following day.

As of Tuesday the Sacramento, Orange County and Riverside Sheriff’s Departments have publicly stated that they will not enforce the new orders.  “Compliance with health orders is a matter of personal responsibility and not a matter of law enforcement,” said Don Barnes, Orange County Sheriff-Coroner in a press release.  “To put the onus on law enforcement to enforce these orders against law-abiding citizens who are already struggling through difficult circumstances, while at the same time criticizing law enforcement and taking away tools to do our jobs, is both contradictory and disingenuous.”