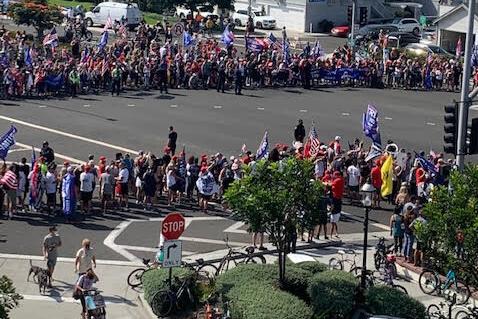 Supporters and protesters gathered along Newport Blvd. in Newport Beach to watch President Trump make his way to a private fundraiser on Lido Island. 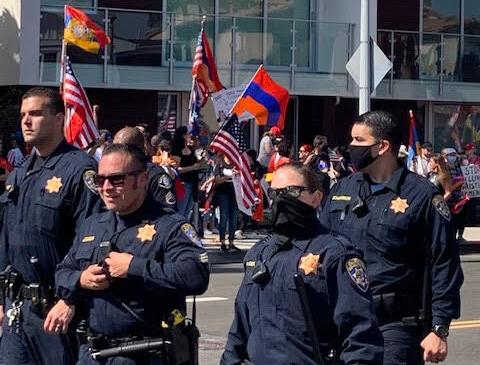 Supporters and protesters gathered along Newport Blvd. in Newport Beach to watch President Trump make his way to a private fundraiser on Lido Island.

Thousands of Trump supporters lined up a six-mile stretch from John Wayne Airport to the event, hosted in the home of Oculus VR co-founder Lucky Palmer.

“We came out here today to support the president,” said Carson, who wished to withhold his last name. “We wanted to add some positivity into the world during coronavirus.”

Large crowds gathered near Lido Village, most of them wearing masks, but by no means social distancing. The afternoon was peaceful throughout, with only small arguments sparking between the supporters and protesters.

Another layer to this event was the strong showing of the Armenian community.

Armenians around the globe are trying to bring awareness to what is happening in Artsakh. The de facto nation that lies between Armenia and Azerbaijan is the flashpoint for an attempt to restructure the ancient border. The region, which is governed and inhabited by a 99% Armenian population, has been a volatile issue in the Caucasus region since the 1990s.

“A lot of what is happening is being funded by our tax dollars,” Andre Grigoryan said with an Armenian flag draped across his back along the procession route.

According to the Security Assistance Monitor, the U.S. sends over $100 million in total value of security equipment to the Azeri government. After many efforts, the U.S. government has yet to formally recognize the Armenian Genocide for over a century after the massacres. In 2019, both the House and Senate passed resolutions recognizing the events as a genocide, but the White House did not take up the matter.

President Trump made his way through the Newport Beach crowd at 11:45 a.m., arriving at the invite-only event on the end of Lido Island. The event cost over $2500 to attend, with a premium deal available for $150,000 to get a picture with the commander-in-chief.

By 2 p.m., Trump and his motorcade left to a cheering crowd still ranging in the thousands.

With the election just over two weeks away, President Trump will make his last few campaign runs to states like Arizona and North Carolina through next week.