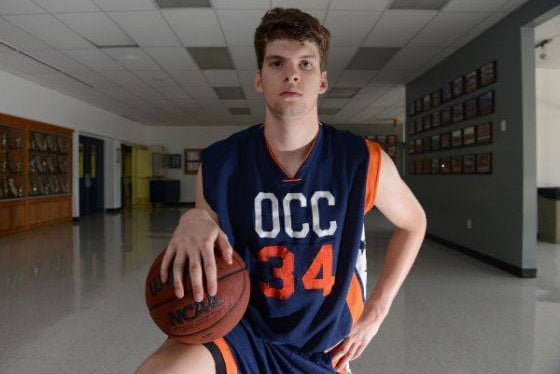 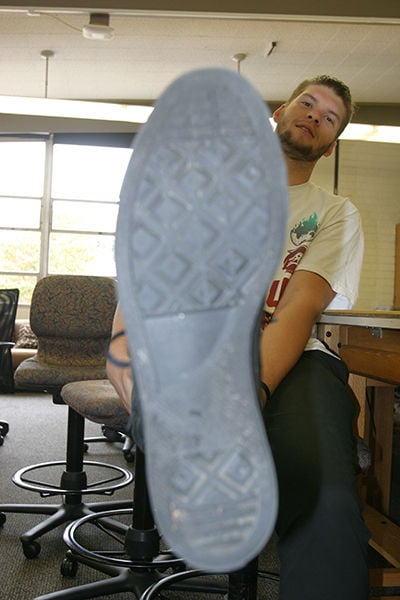 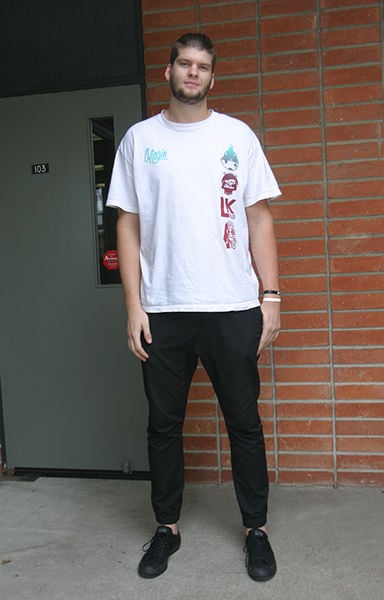 As Lucas Emery can tell you, standing 7-feet tall and wearing size 15 shoes can be a challenge.

Emery, who plays center for the Orange Coast College basketball team, said living in a world made for people under 6-feet isn’t easy.

When he wakes up in the morning, his feet are dangling off the end of his queen size bed. He has to take a defensive stance in the shower just to get his hair wet and when he gets into the car he has to recline the seat all the way back to try and get comfortable.

“There are a lot of disadvantages of being 7-foot,” Emery said. “Every single door I walk through I have to duck under — but on the bright side if you need me to reach something on the top shelf I can do it with ease.”

And, he said, perhaps the most difficult thing about being a 7-footer is finding size 15 shoes.

Emery, a native of Perth, Australia, has dual citizenship because his father was born in the U.S. Emery’s father moved to Australia to live with family members after losing both his parents when he was only six months old. Years later, Emery’s father discovered he had a brother living in Huntington Beach and both Emery and his father were able to visit California to meet him.

Emery dreamed of playing basketball in the United States since he was 13 years old. In 2010, a few years after graduating high school, he made the decision to pack up, take the 30-hour flight from Perth to Orange County and follow his dream.

“I have dual citizenship and always wanted to live here,” Emery said. “I missed home at first but about six months later I realized that I had so much freedom from my parents.”

Once Emery got settled in, it was time to choose where he wanted to attend college and play basketball. He said he looked at many colleges but decided to attend OCC because of the atmosphere, coaches and connections he made with players.

“It was more about being a team at OCC. It wasn’t about I, it was about we,” Emery said. “It was the first time I heard there is no I in team.”

Even though Emery said he has loved basketball since he was young, it was hard for him to watch the NBA because Perth only had seven channels on TV. Additionally, when American basketball was on, the only teams covered were the Lakers, Heat and Cavaliers.

He said he had to follow his NBA idol Dirk Nowitzki online.

“My coach is going to laugh when he reads this, but I think of myself like Dirk. I’m more of a shooter than a post player but I can still post,” Emery said.

Emery said he became a shooter in high school because there were three other teammates who were 7-feet tall. He got used to playing power forward or forward but now coaches want him to play center.

Emery was injured his first year playing at OCC going up for an alley-oop at the end of practice. He said his ankle popped as he was jumping and the injury forced him into surgery.

“It was freakish and made no sense. I had never had ankle injuries before and for this to happen was insane,” Emery said.

He was also hurt in March because he started practicing too soon and didn’t ease into practice.

“I didn’t want to admit it to myself so I walked around on my broken ankle for a week before I couldn’t take the pain any longer,” Emery said.

Post-surgery was hilarious, he said. Seven doctors plus his dad had to help him get out of the hospital bed because of his size.

“What we didn’t think about was how I was going to get in the house when we got home,” Emery said. “I crawled backwards on my hand because at that time I was 286 pounds and there was no way my dad could carry me.”

After surgery, doctors recommended he take a bath, but for Emery the word bathtub wasn’t in his vocabulary — nor had he ever even thought about attempting to take one.

Jamaal Lee, captain of OCC’s men’s basketball team and Emery’s roommate, said Emery was the first guy to approach him when he came to Orange Coast. Lee said it was weird because he didn’t think that Emery was going to be so down to earth because a lot of 7-foot people he has encountered are cocky.

“Lucas is more like a gentle giant,” Lee said. “He is the most down to earth person you could ever meet and I’m happy he’s my teammate.”