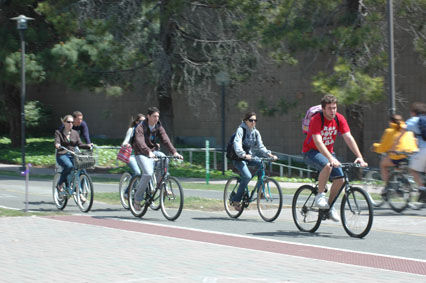 OCC's Bike Ways Club is working on a plan to bring bike and skateboard paths to campus in an effort to increase safety and reduce parking congestion. 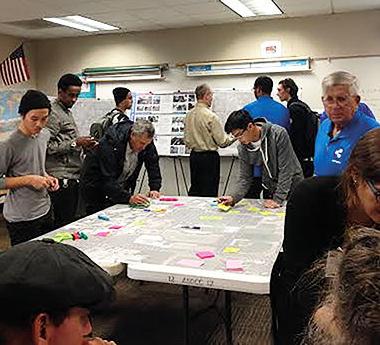 Members of the OCC Bike Ways club meet Monday to discuss plans for bike and skateboard paths on campus.

OCC's Bike Ways Club is working on a plan to bring bike and skateboard paths to campus in an effort to increase safety and reduce parking congestion.

Members of the OCC Bike Ways club meet Monday to discuss plans for bike and skateboard paths on campus.

Pedestrians on campus may soon have a reprieve from the fear of being hit by an errant skateboard or being forced off a walking path by a whizzing bicycle.

In an effort to encourage biking and other modes of wheeled transportation, Orange Coast College is in the process of creating designated pathways on campus that are expected to reduce traffic hazards and promote efficient movement.

In what initially began as a design project by campus club OCC Bike Ways, the Bike-Skate Master Plan has been in development for four years. One of the main goals of the plan is to make students more aware of the different modes of transportation available to them.

“There are going to be many moving parts coming together that will slowly and organically grow overtime, and the more we invest in this, the less we invest in parking structures,” Architectural Technology professor Dean Abernathy said.

Creating and maintaining vehicle parking is expensive and has prompted faculty and administrators to encourage more people to walk and bike.

Planners expect to evaluate circulation patterns on campus to create a safer separation between pedestrians and alternative transportation users. It has been established that certain core areas will be used as dismount zones while wide sidewalks can possibly be converted into a series of multi-use pathways.

“I think skateboarders and bikers need this and want this,” Rojas said. “It’s going to be safer, and they can go a little faster on their way to class and can get around a lot easier.”

Due to OCC’s relatively flat campus, riders will be able to travel safer than those on campuses with hills and other design features.

“We have the perfect weather and perfect topography for biking — we should be doing it all the time,” Abernathy said.

OCC has partnered with KTU+A, a San Diego-based planning and landscape architecture firm, to oversee the path’s design. The company has worked with several schools in the past and recently finished a bicycle-pedestrian trail plan for the City of Costa Mesa.

“We are going to be working primarily at a high level, where we are showing alignments, where routes will go through on campus and generally how they are constructed,” KTU+A Senior Mobility Department Planner Alison Moss said.

Perceived safety risks surrounding the project such as theft and collision remain a concern for community and faculty members.

“If you don’t organize it safely and sustainably for people as you get more bikes, you are going to have more conflicts,” Abernathy said.

The OCC Facilities Committee allotted $100,000 for the project, while the ASOCC matched the grant and gave $120,000 to the planners for them to use at their discretion.

“There is no single solution to this,” Abernathy said. “If it’s a more complex solution, or a more complex bike path, we will go and find the funding for it somewhere.”

If the group gets approval for the purchases, prototyping can begin as soon as next semester. Ideas that would benefit long distant commuters such as bike centers, educational programs, maintenance stations and commuter showers are currently in discussion.

Since the trail is intended for both bike riders and skateboarders, overall inclusivity is key for the planners of the path.

“It’s all about student feedback,” Facilities Committee student representative Roy Duvall said. “We want to hear from pedestrians, bicyclists and skateboarders because we need everybody to be happy.”

The City of Costa Mesa is working with OCC to examine the various unsafe entries into the school. They plan on requesting grants from the state of California to further fund the project.

The project is expected to begin in fall 2016.