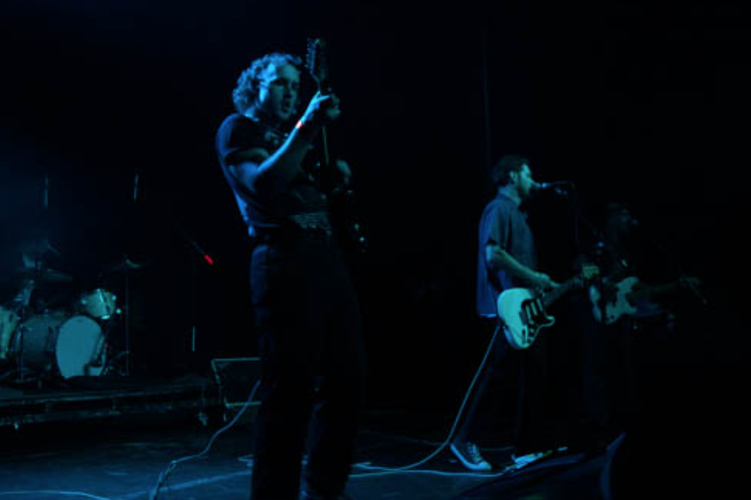 Together Pangea performs an over-hour-long set at The Observatory on June 2. 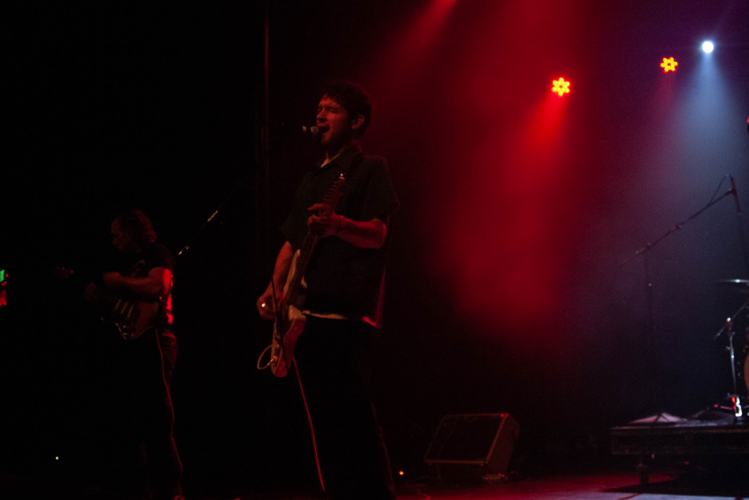 Lead vocalist and guitarist William Keegan performs as part of Together Pangea at The Observatory on June 2.

Together Pangea performs an over-hour-long set at The Observatory on June 2.

Lead vocalist and guitarist William Keegan performs as part of Together Pangea at The Observatory on June 2.

As the sun set over The Observatory in Santa Ana, a crowd gathered for a night of music that ended up being equal parts exuberant and raucous. From the opening sounds, the mosh pit became a living, breathing organism of joy with a few casualties. At one point, a young woman emerged from the chaos, dazed with blood trickling from her nose smearing her lips.

Whether they were there to see the headliner, Together Pangea or one of the opening acts, Death Lens or The Paranoyds, fans like Jonah Valenzuela of Orange said it was the amazing stage energy of bands like Together Pangea that had brought him out.

From the first chords of Death Lens, the crowd began moshing, picking up on the frenetic energy of the band as frontman Bryan Torres strode across the stage in a shirt that read “Los Angeles Savior.” One of the standouts of the night, the band has a sound that sent water bottles flying and hair thrashing.

While hailing from L.A., Death Lens sounds very much like a band straight out of the 1970s New York City scene. One could imagine catching them at CBGB before it turned into a John Varvatos store. But they very much have a garage and modern edge to them. They are like your best friend’s older brother’s band but good.

One of their best attributes was the interaction with the crowd. During “Not Impressed,” the band leapt offstage and performed the track among the crowd.

The Paranoyds were up next with their own brand of 1970s punk that is languid, seductive, big on the eyeshadow and all about the attitude. They're like The Runaways on Quaaludes- all the in-your-face ‘tude, but at a much slower pace.

They had brash drums, whining guitars and tight, three-part harmonies. It sounded as if Blondie and The B52s had a baby, but with a garage roughness. A highlight of their set was when they brought a fan in a Paranoyds shirt on stage to sing “Laundry.” Judging by the number of fans in the audience in pre-bought merch, they’ve developed an extremely loyal following.

Finally, it was time for Together Pangea, the band most of the fans seemed to be there to see.

They are four of the most ordinary looking guys you’ll ever see. They look like they’d be sitting across the cubicle from you doing your taxes, but they had the packed crowd mesmerized. The entirety of the floor became a mosh pit – a seething mass of humanity coming together for the collective love of live music. Throughout the set many of the die-hard fans pressed themselves against the crowd barrier and at times spilled over it, mouthing along to every word.

Together Pangea was unpolished garage rock with pop hooks and catchy, sing-along choruses. Their music would be perfect on the soundtrack for a coming of age tale about a kid from the Valley who discovers life and love at a record store. While very guitar heavy, they had drums that reverberated starting in your feet and pulsated through your whole body.

A crowd favorite was “Marijuana” off their latest album, “DYE.” Bringing the 1960s vibes with the sing-songy chorus, the track still had the band’s signature emphasis on distorted guitars.

But that was nothing compared to the way the audience reacted when the band performed their most popular song “Sick Shit” as the final track in their set. The energetic interchange between fans and the band was magical and it’s easy to see why Together Pangea has been able to maintain such a devoted fanbase for so many years since they formed in 2008.

Joseph Borbod of West Covina said that he has been a fan for eight years and has noticed a transformation in the band during that time.

“I feel like I have seen a change in their sound,” Borbod said.

As the lights dimmed onstage and the band began to pack up their gear, a few cries of “Encore!” rang out from the crowd, but soon a demand for more encompassed the entire room. Bowing to the pressure, Together Pangea returned and performed three more songs.

Overall, it was an extremely well curated night. Each of the bands had enough commonality that fans of one could find a lot to love about the other two but there was enough variety to keep things interesting. Fans left sweaty with flushed faces high on the rush of seeing live music well performed.