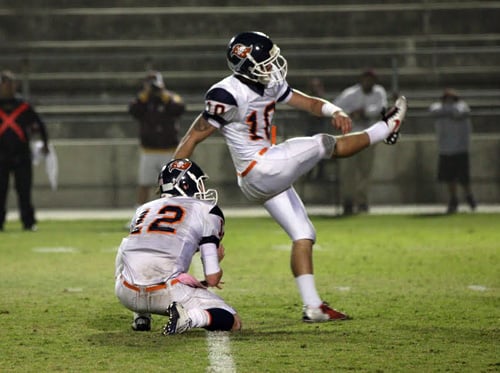 Jackson Dionne, No. 10, goes through the motions of a kick during a game against Southwestern College on Oct. 22. 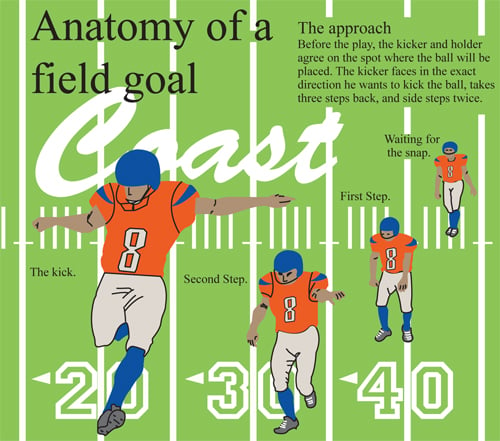 Jackson Dionne, No. 10, goes through the motions of a kick during a game against Southwestern College on Oct. 22.

During a typical week at practice, Jackson Dionne kicks 50 footballs on Tuesday, 40 on Wednesday, 30 on Thursday, and, if he has a game Saturday, he’ll rest his leg on Friday.

As a field goal kicker for the Orange Coast College Pirates, repetition is his practice. On Tuesday afternoon while the rest of the team warms up on one side of the field, Dionne is on the other side practicing his kicks before joining the team.

A player helping Dionne practice kneels down with several footballs at his side. He yells as he snaps a football into place signaling Dionne to charge forward. His right leg swings up from under him as it connects with the ball, producing a small boom that resonates across the field, and sends the ball sailing into the air spinning end over end.

The 18-year-old college freshman has only been kicking for the Pirates since August, but in that short time has proven himself to be a skilled kicker, according to the coaching staff.

“When I saw him kick the first time I knew he had a pretty good leg, but having a good leg doesn’t always equate to being a successful kicker. You have to be consistent and you have to kick under pressure,” said head football coach Mike Taylor. “He’s just doing his job and he does it real well.”

Coach Alan Bohn recounted the game-winning play, which he said Jackson was not supposed to make.

“He shouldn’t have made that field goal. It was in the mist and rain. It was 51 yards. He’d been standing on the sideline for the most part of almost four hours. There was no reason why he should have made it, but he did because he’s a competitor,” Bohn said.

His coach may have been uncertain of the play, but for Dionne, who had missed a 40-yard field goal earlier in the game, missing the field goal that would earn the Pirates an early victory and prevent them from going into triple overtime was not an option.

According to Taylor, the freshman’s consistency has led him to kick three field goals over 50 yards, a feat that no other player has accomplished in a single season.

“He doesn’t have the school record, but he’s got more 50-yard field goals than anybody in the school’s history,” Taylor said.

His coaches attribute his kicking ability to the soccer experience he had earlier in his childhood before he moved on to play football at St. John Bosco High School, where he played as a defensive back and eventually became the team’s kicker during his senior year.

Kicking in high school is much different from kicking in college because there is no tee and players must kick the ball off the ground, coaches said.

“One of the great things about Jackson is that he hadn’t kicked a football off the ground until about three weeks before the season started so he had all that to learn,” Bohn said.

Though some may think of kickers as specialized players, Bohn said Dionne has a full range of skills.

“What people don’t realize is that if Jackson had been a football player all along instead of a soccer player, he’d probably be at two or three different positions on the team. He can throw the ball, he can kick and he’s real fast,” he added.

As for the pressure of being a kicker, the player said he’s actually learned to benefit from it.

“It’s obviously a pressure position but I enjoy the pressure. I live on it. It’s a really good adrenaline rush,” Dionne said.

Though Dionne admittedly said he doesn’t do the same full-contact drills in practice as the rest of the players, his teammates still respect his work ethic.

Dionne credits much of his success to his team and his coaches.

“A couple times he’s thanked me for believing in him. Obviously when you make it, we really believe in you,” Taylor said.

During practice Bohn reminded the kicker to keep his head down, a habit he developed.

“I’m always anxious to see where the ball goes, so it’s just something I keep in my head and remind myself to do,” Dionne said.