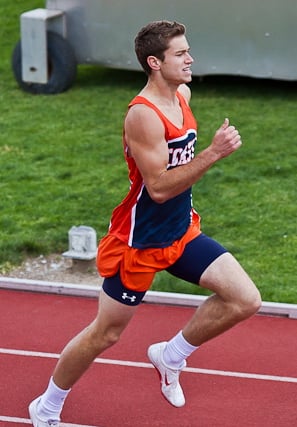 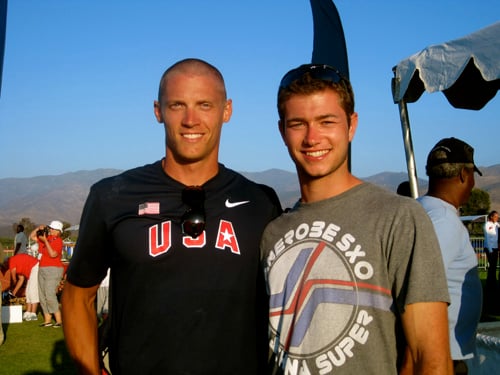 Orange Coast College decathlete Andrew Cruikshank pushes himself in his quest to be like his idol, two-time Olympic champion Trey Hardee.

And by pushing himself, he means six to seven-hour training sessions each day along with workouts at the Sport Science Lab.

The extreme training is required, Cruikshank said, because of the demands of the decathalon. The competition includes 10 events: the 100-meter, the long jump, the shot put, the high jump, the 400-meter, 110-meter hurdles, the discus throw,  the javelin throw, the pole vault and 1500-meter.

And while an Olympian may be Cruikshank’s idol, the person who introduced him to the decathlon was former OCC track decathlete Keegan Cooke. Last year, when Cooke was still a student at OCC, he took Cruikshank on a trip to Africa.

“I went to Africa with Keegan, who was also on the track team last year, and it was a really good experience to see where he came from. The trip was more like a decathlon legacy or a decathlon friendship, which was pretty cool,” Cruikshank said.

During their stay in Africa, he and Cooke were able to explore Cooke’s homeland in Zimbabwe, but they were also able to train and discover the other side of the world. Cruikshank said that that experience is one of his favorites because he loves to travel and couldn’t think of a better way other than to spend it with a good  friend.

Cooke was equally enthusiastic about the trip.

“That time of year was not only great because I could spend it with him, but I was able to visit my homeland,” Cooke said.

Coming from Foothill High School, Cruikshank played basketball and football along with running track. In fact, he has been participating in track for eight years.

During his senior year of high school, he broke the high school discus record set in 1981 at a mark of 176-feet, 8-inches.

Track is nothing extraordinary for Cruikshank because his whole family has been involved in it. His dad was his throwing coach while his older sister was an All-American heptathlete for Chico State and his older brother was a thrower at Cal State Fullerton.  Now his sister is a jumps coach at the University of Central Missouri.

Cruikshank said he is training so hard so he can bring his competition to the next level. His goal is to break the decathlon record at OCC and pursue decathlon at the four-year university level and beyond.

“OCC has really set me up for my future more than I expected it to and it’s opened a lot of doors and opportunities for me,” Cruikshank said.

In addition to his six to seven hours-a-day training, he also does training at the Sport Science Lab in San Juan Capistrano with the help of head trainer Gavin MacMillan.

“He is maturing into a decathlete and as of right now he’s developing into a better one, whether it’s in the discus, pole vault or running,” Knox said.

When he’s not practicing, Cruikshank enjoys spending his free time outdoors going boating, fishing, rock climbing or just hanging out with friends. Other than that, he loves to dance, especially at family weddings, and will dance to any type of music.

“Dancing is in my genes,” Cruikshank said.

On the weekends, he has a part-time job as a referee at National Junior Basketball league in Tustin. He has been doing it for four years and enjoys that he is in charge.

Right now, he’s still an undecided major, but he has taken a wide variety of classes and is leaning toward business.

If the track career doesn’t work out for him, he plans to move into the business field and said real estate is a possibility. He said he likes the idea of buying and selling new houses.

As for now, he hasn’t decided what school he wants to attend, but he’s keeping his options open.