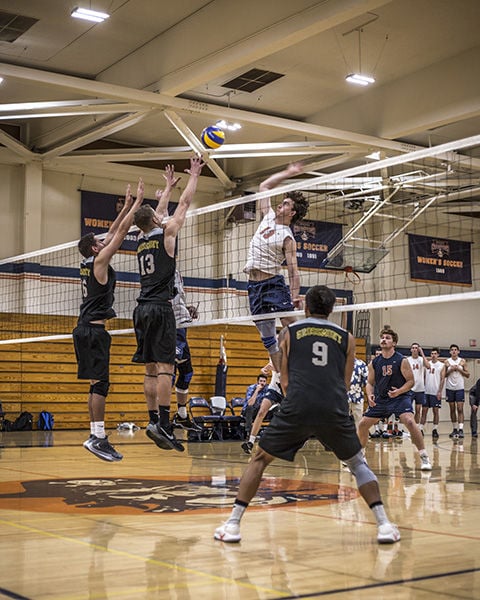 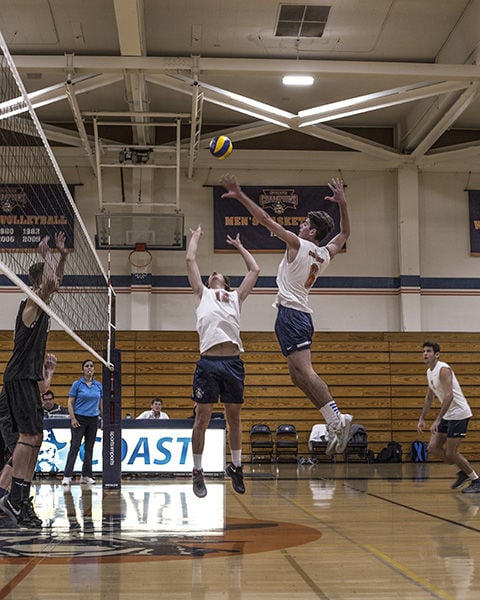 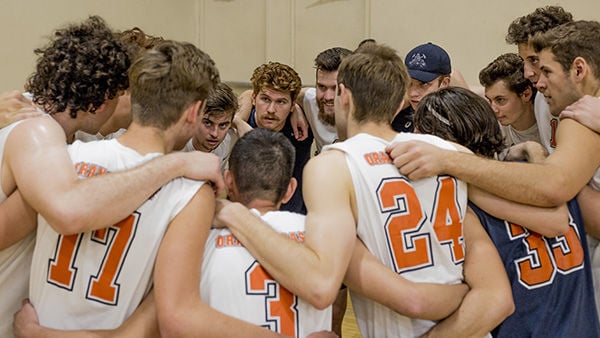 The Orange Coast College men's volleyball team gathers for a huddle during its face off with Grossmont College Friday night in the Basil H. Peterson Gym.

The Orange Coast College men's volleyball team gathers for a huddle during its face off with Grossmont College Friday night in the Basil H. Peterson Gym.

The Orange Coast College men’s volleyball team cruised its way to a three-set sweep over the visiting Grossmont College Griffins Friday night in the Basil H. Peterson Gym, settling comfortably into a 4-game win streak that has become a trademark for the Pirate men.

The first set saw the Pirates struggling to settle into their zones as costly mechanical errors seemed to dictate the momentum of the game. Multiple missed offensive opportunities, serving errors and a lack of vision on the court gave Grossmont a fighting chance throughout the set, leaving Pirate fans in the stands quiet and scratching their heads.

A booming unanswered kill by freshman outside hitter Kyle McCauley rejuvenated the Pirates, breaking Orange Coast out of a 6-6 back and forth with Grossmont and effectively carrying the momentum to set one’s 25-20 conclusion.

Set two came with an electrified start from the Pirates, kicking off the game with a 4-0 run and a nearly unanswered drive.

“OK, we got seven. Let’s get eight,” Grossmont head coach Travis Lee could be heard saying to his team as the Pirates closed in.

Eight was all Orange Coast would allow as they maintained full control over set two, steamrolling right over the Griffins 25-8.

By set three, it was a family affair as OCC head coach Travis Turner flexed the muscle of his full roster, sending a mixture of starters and non-starters on to the court to complete the sweep, 25-18.

“Wyatt Henson was really the difference out there,” Turner said. “It was our first time trying him out as outside hitter and it took him a little while to get used to it.”

Offensive powerhouse sophomore opposite Henson’s 12 kills led the night for the Pirates, with freshman opposite Clark Steele coming off the bench to contribute 8 kills and McCauley adding 6 of his own.

According to Henson, he had not played on the outside in three years.

“It took me a little bit to shake off the rust but once I got the hang of it, it came naturally,” Henson said.

The Pirates next set their sights on the Santa Barbara City College Vaqueros Wednesday for their final non-conference match-up before beginning conference play at Golden West College Friday.

The Pirates will look to push their win streak to five as they square off with the Vaqueros at 6 p.m. in the gym.