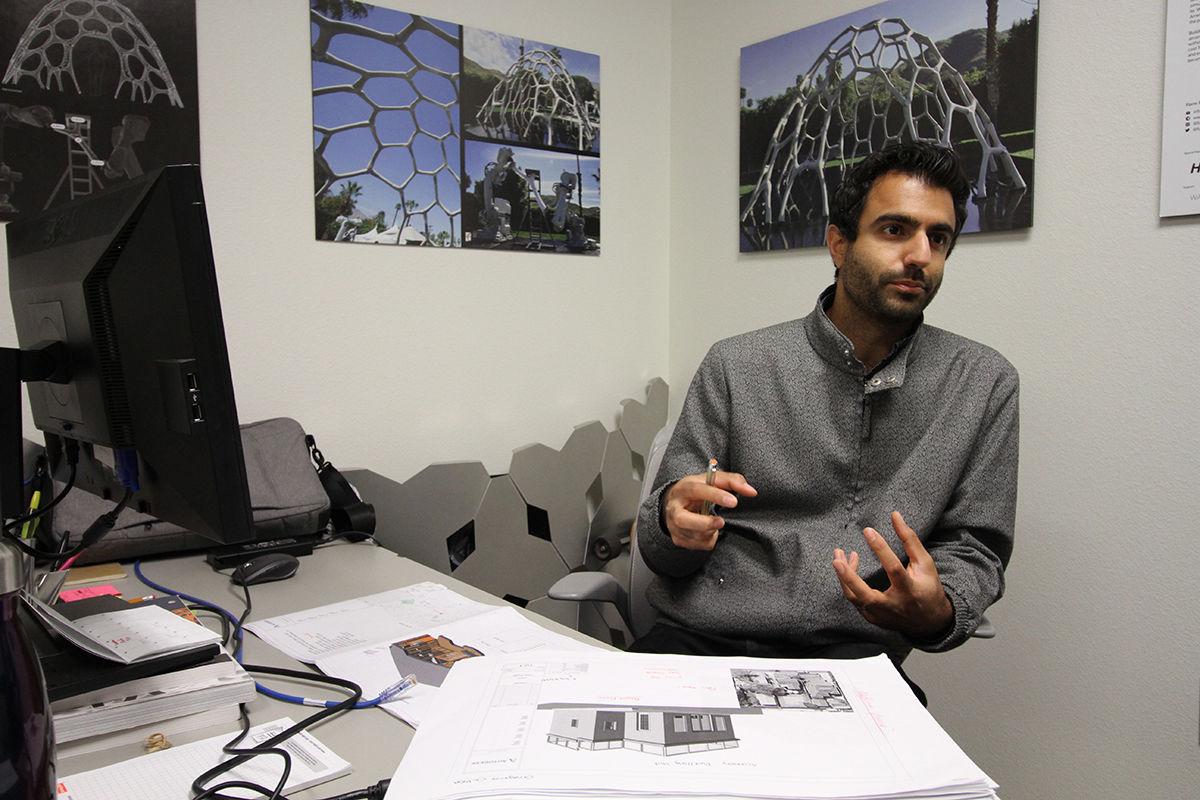 Joseph Sarafian worked with students this semester to build and install a structure using robots, fabric and concrete. The design is a permanent installation at the LAB in Costa Mesa.

A structure built by architecture students at OCC resembles the MARS design in Palm Springs.

Joseph Sarafian worked with students this semester to build and install a structure using robots, fabric and concrete. The design is a permanent installation at the LAB in Costa Mesa.

A structure built by architecture students at OCC resembles the MARS design in Palm Springs.

Using the precision of industrial robots to create art, Orange Coast College architecture faculty and students were challenged to design and build a sculpture for The LAB Anti-Mall in Costa Mesa earlier this month.

According to Joseph Sarafian, the OCC architecture instructor who spearheaded the project, the creation is called “Cytocast” because “the word ‘cyto’ refers to a cell or group of cells pertaining to the modularity of the structure, while ‘cast’ refers to the process of casting concrete.”

The sculpture was the centerpiece of Sarafian’s Architecture 203, Design Build 2 class this semester, which allowed students to not only learn about the robotic casting process, but build a permanent, public concrete installation.

“The class is all about designing and fabricating. This is a unique class because it actually lets students get their hands dirty and build things,” Sarafian said.

Sarafian and his business partner Ron Culver first came up with a robotic technology for casting concrete during a class at UCLA in 2015.

“There’s been little advancement in concrete casting in the last 2,000 years,” Sarafian said. “(We wondered) How can we automate the (labor and time intensive) ancient process of casting concrete?”

Beginning with two industrial robots positioning a sleeve of fabric, they found that they could “generate really precise concrete and create an adjustable mold for concrete,” Sarafian said. “It’s kind of a holy grail of concrete fabrication.”

With an adjustable mold, a new one doesn’t have to be built for every new cast.

“You’re just manipulating something,” he said.

Sarafian explained that after industrial robots position the fabric, concrete is poured in from the top, filling a sleeve. After about an hour, a concrete-shaped wishbone is removed. The robots move to the next position, cast and repeat.

Amazon founder Jeff Bezos reached out to Sarafian and Culver and asked them to build a 15-foot proof of concept. Last year he commissioned Sarafian and Culver to build the first robotically-cast structure in Southern California, the MARS Pavilion in Palm Springs — an acronym for Machine Learning, Automation, Robotics and Space Exploration .

Inspired by the MARS Pavilion, The LAB reached out to OCC with the possibility of installing the same type of sculpture there.

“We’ve had previous collaborations with OCC’s students and felt a collaboration with the architecture and technology department was a great way to recognize local design talent and continue our support of students engaged in arts learning,” Shaheen Sadeghi, founder and CEO of The LAB said.

Working with this technology has impacted at least one of Sarafian’s students.

“We’re really lucky to have access to a class that utilizes robots,” Emily Rose Vanags, an architecture major said.

Vanags has a background in art museum and gallery studies, with a master’s in art history. She said she originally came to OCC for some prerequisites but fell in love with architecture after taking the class.

Moving forward, architecture will be the centerpiece in Vanags’ portfolio, she said.

“I think I’m definitely going to stick with robots. Using organic shapes by using machines has a nice contradiction and makes (art and design) beautiful,” she said.