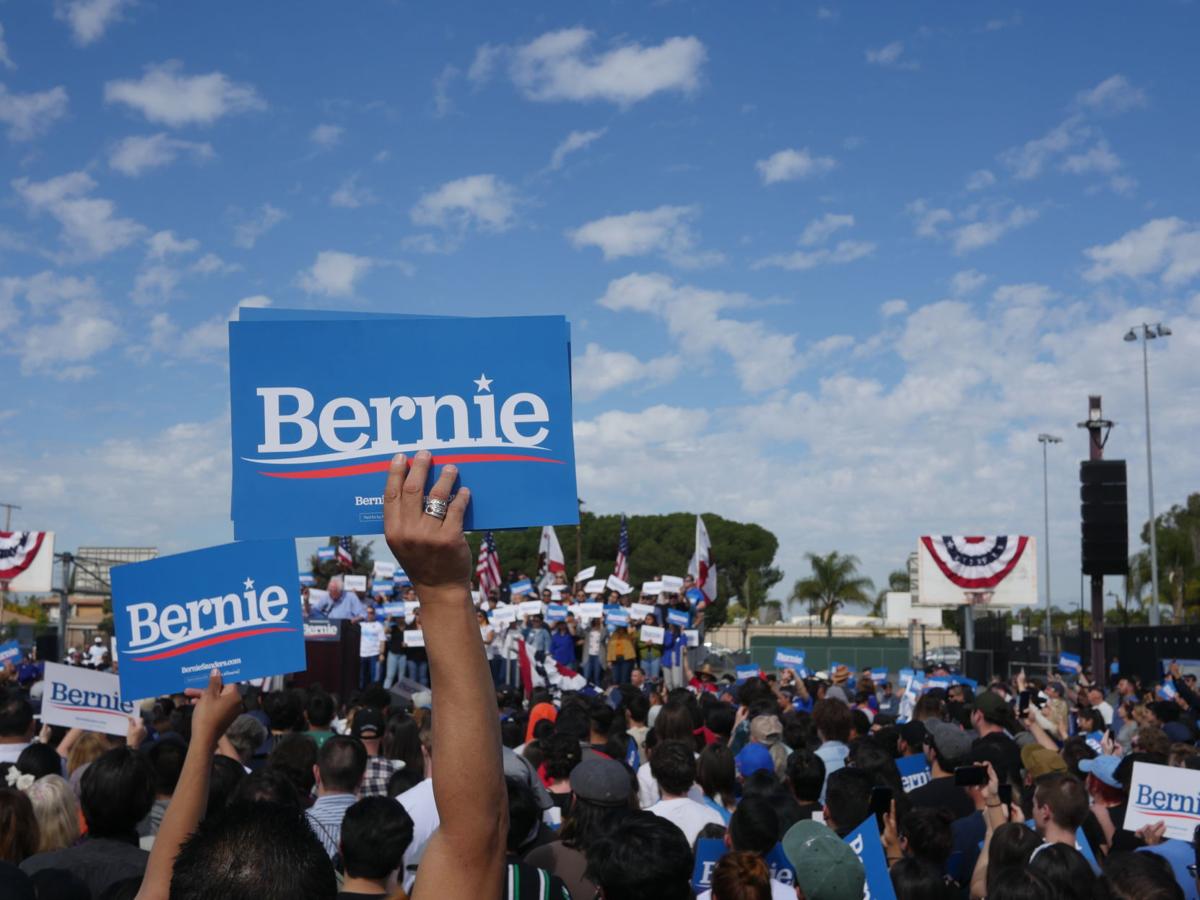 An attendee waves a sign while Sen. Bernie Sanders (D-Vt) speaks to a crowd at Valley High School in Santa Ana on Friday. 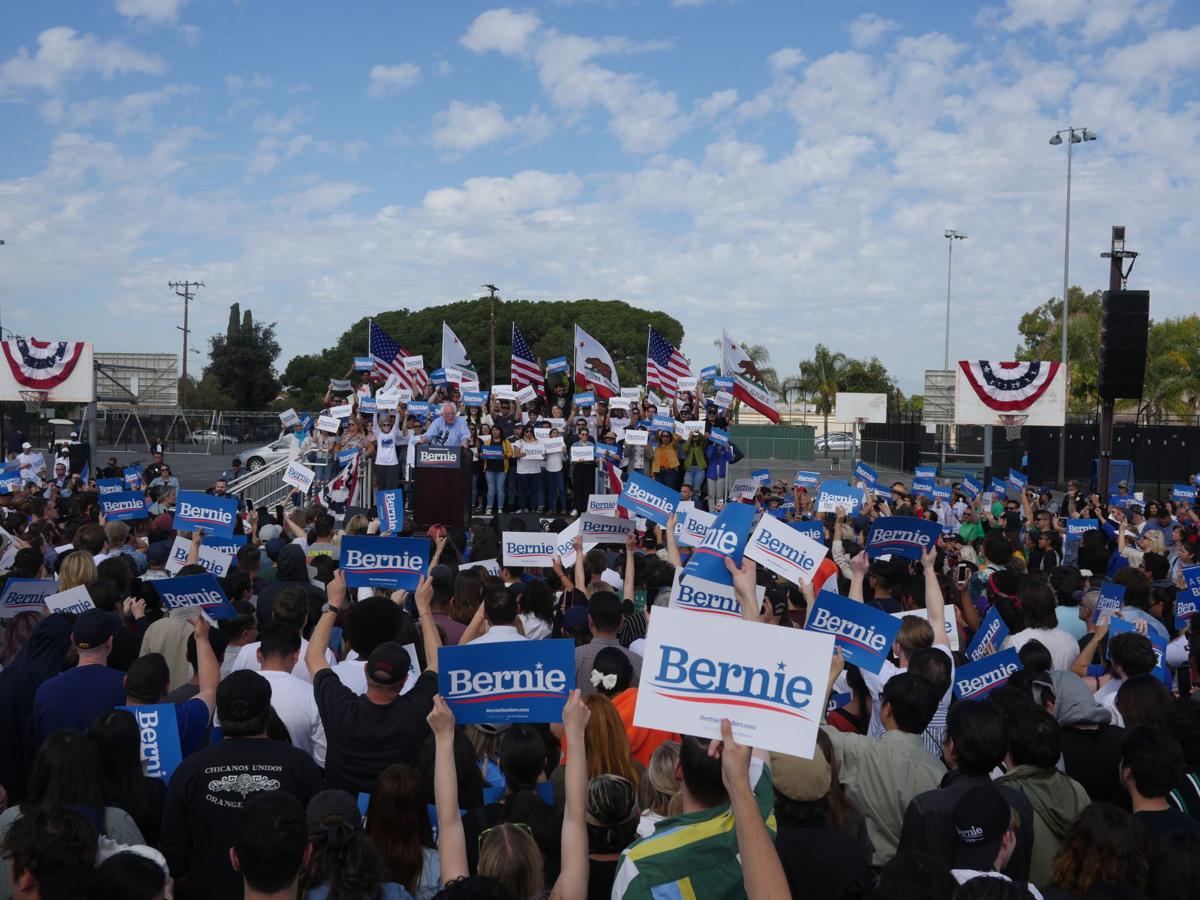 Sen. Bernie Sanders (D-Vt) stands on stage and delivers his stump speech to a rally in Santa Ana on Friday ahead of the Nevada caucuses and eventual primary vote in California.

An attendee waves a sign while Sen. Bernie Sanders (D-Vt) speaks to a crowd at Valley High School in Santa Ana on Friday.

Sen. Bernie Sanders (D-Vt) stands on stage and delivers his stump speech to a rally in Santa Ana on Friday ahead of the Nevada caucuses and eventual primary vote in California.

Sen. Bernie Sanders came out to rally about 1,000 southern Californians to go to the polls in an event held Friday on the eve of the Nevada caucuses.

Surrounded by his supporters at Valley High School in Santa Ana, Sanders reminded those in attendance that in addition to voting, they need to bring their friends and request a new ballot if registered as No Party Preference.

Sanders, a leading candidate in the Democratic party’s presidential nominating contest, said that California is incredibly important in this year’s primary election.

What appeared to be jubilant crowd filled the school’s outdoor basketball courts where the stage was set up and overflowed onto an adjacent track.

During Sanders’ stump speech, chants of the candidate’s name broke out. In between the chants, the speech addressed issues such as climate change, the green new deal, overturning marijuana convictions, providing a clear path to citizenship for immigrants and ensuring that Roe v. Wade is codified into law.

According to a poll of California voters released Friday by UMass Lowell Center for Public Opinion, Sanders is currently leading with 24 percent of the vote. Aside from bolstering his support within the Democratic party, a significant strategy made by Sanders in the rally was to reach those who are registered under the category of No Party Preference.

No Party Preference voters in the state are a sizable group according to sos.ca.gov. The best available estimates indicate that there are just over 5 million people registered under No Party Preference, or 25.9 percent of the electorate.

Sanders urged No Party Preference voters to request a crossover ballot at their polling place so they could participate in the Democratic primary. Additionally, a ballot harvesting table was available where people could check the status of their registration or turn in their ballots to have them hand delivered to their polling place.

The make-up of the crowd ranged from high school students to retirees and black, brown, white and Asian people of different backgrounds. Many of the attendees had different reasons for supporting Sanders’ campaign

Liam Whitney, a teacher of 15 years, said that the education system deserves more financing when compared to big corporations.

“There’s so much money that goes into corporate subsidies and by redistributing that money we can certainly afford it and it’s a great investment for the whole country,” Whitney said.

Other voters like Edgar Payne, a 38-year-old hematology student, were drawn to Sanders because of his frank way of talking about the issues important to them.

“I like him because he talks about the facts, most other developed nations have Medicare for all and they are doing better than us on many metrics,” Payne said.

Payne also said that Sanders pointing out how the media is spending way too much time focusing on every dumb thing that Trump does also led him to support Sanders’s candidacy.

Many people echoed the same sentiment — wanting an economy that worked for them.

“What people want is an economy at service to society, not a society at the service of the economy,” 70-year-old Eugene Alanis said.

After the rally in Santa Ana, Sanders headed north for Bakersfield. California’s primary is March 3, one of many states to vote on what’s known as Super Tuesday.