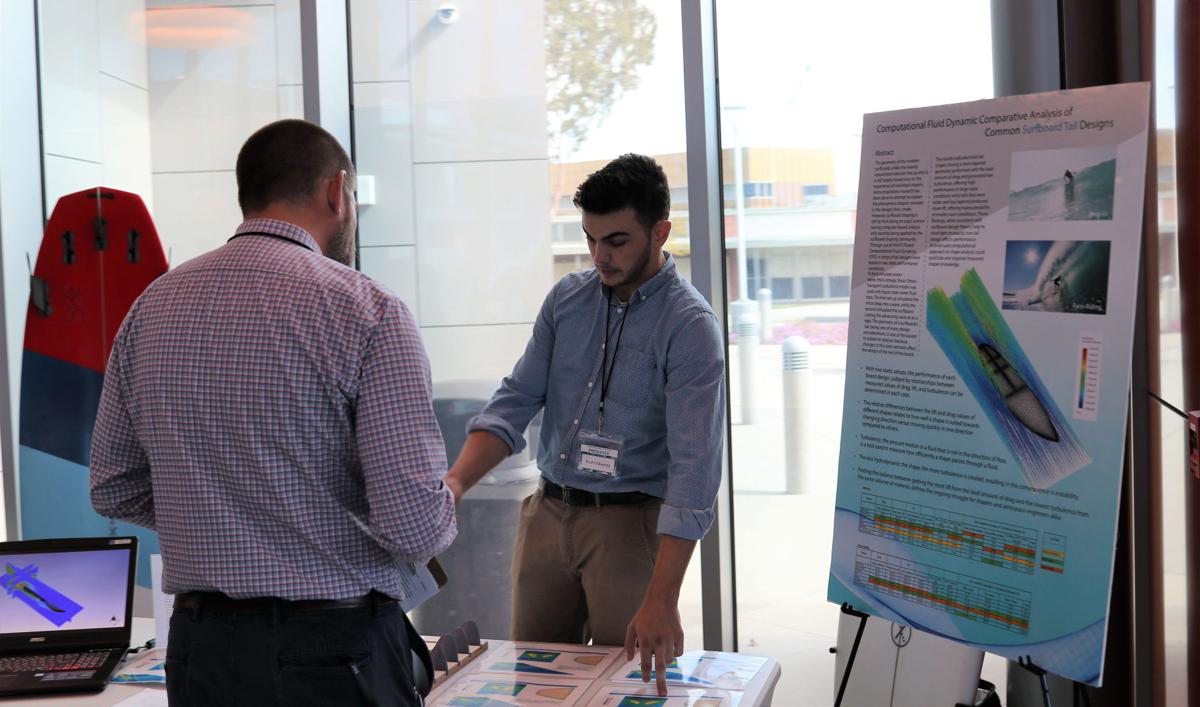 Bodhi Edwards shows his winning research to an attendee at the Giles T. Brown Student Project and Research Symposium on Friday. 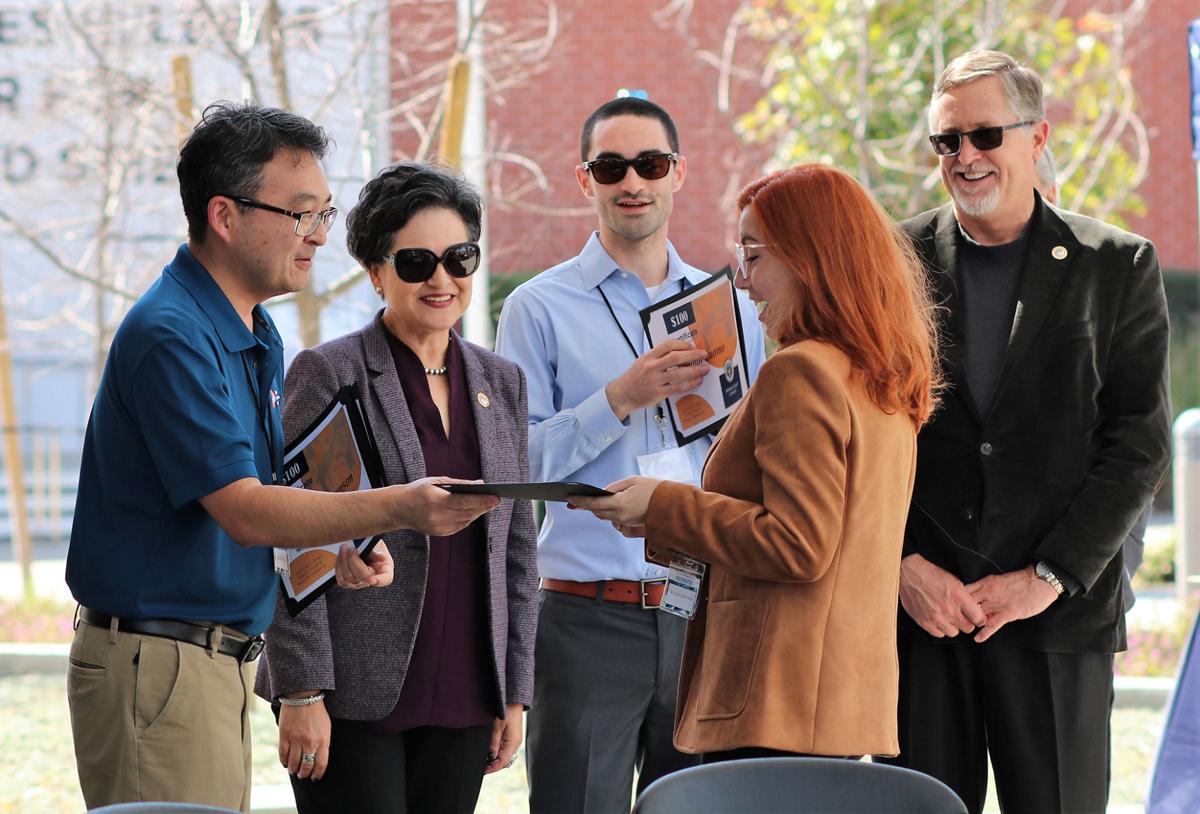 Bodhi Edwards shows his winning research to an attendee at the Giles T. Brown Student Project and Research Symposium on Friday.

More than 60 Orange Coast College students presented research on everything from the Soviet Union to robots during the Student Project and Research Symposium held on campus last week.

The Giles T. Brown Student Project and Research Symposium gives students a venue to showcase work they have done, either in class or independently, through oral presentations, posters and performances.

“It reminds all of us who don’t have contact with the students on a day to day basis all of the great work they're doing,” Tara Giblin, the co-founder of the Research Symposium and the dean of Math and Science said.

Students are mentored by staff and faculty to help research topics such as intelligent automation robotics, postpartum depression or the Soviet Union’s impact on the world.

“I've been with this event since the beginning and it is so amazing to see how this event has grown,” Rachel Ridnor, a sociology instructor and co-chair of the Symposium Committee said.

According to Michael Sutliff, a co-founder of the symposium and the dean of Kinesiology, Public Health and Athletics, student participation has tripled since its first year in 2017 when about 20 students presented. This year more than 60 students presented and more than 400 attended.

The symposium has not only grown in participation, but also in diversity of presentation. This is the first year performances, one dance and one musical, have been included, according to organizers.

Mairead Staunton, a 21-year-old music major, demonstrated the significance of nostalgia in Irish music through an interactive performance and presentation of music. At one point, Staunton got the audience to sing a line of an Irish folk song with her, “Hey baby, let the free birds fly!”

Staunton said it was challenging because this was the first year with performance presentations as part of the symposium.

“It’s been a lot of hard work trying to figure out exactly how I was going to piece things together, but a rewarding experience,” Staunton said.

Also, according to Ridnor, this is the first year that a non-social science project won the grand prize.

Bodhi Edwards, a 22-year-old mechanical engineer major, was the grand winner, taking home the title First Author along with $1,500 for his research on surfboard tail designs.

Edwards began his research in October, looking at the shape of the modern surfboard and he used computational fluid dynamics, a type of computer software that helps visualize how liquid flows, to try and figure out how different tail designs affect surfboards in the water.

“I was coming here not expecting to win anything. I just wanted to see if anyone was interested and wanted to get other people’s opinions. I’m excited to continue this research at OCC,” Edwards said.

Every year the attendees and participants fill out surveys so the symposium committee can assess where to refine, improve and expand in order for the event to grow, Sutliff said.

“We do have some dramatic success stories but there are also students who improve their speaking skills among other things,” Giblin said.

Anna Hollister, a 19-year-old political science major, gave an oral presentation and said she is looking at pursuing a career in research for the government so participating in the symposium was a great way to start practicing.

“We have students who continue this research through to their four-year college or graduate school, so I always tell them that this is the first step,” Giblin said.

This year there were over 55 evaluators who are staff members, faculty and administrators, Sutliff said.

“I think we need more events like this to give students an opportunity to step out and do additional things related to their interests,” an evaluator for the event and political science instructor Rendell Drew said.

Sutliff and Giblin said they came up with the idea to have a research symposium while talking over coffee four years ago. They were thinking about avenues to support student development in the area of research and crafted the vision on a Starbucks napkin.

The name Giles T. Brown comes from a founding member of OCC’s faculty who left the college in 1959 to become a faculty member at Cal State Fullerton and eventually became the dean of Graduate Studies. Giles T. Brown’s financial gift to the college funds programs and activities that benefit instruction like the symposium.

Kevin Ballinger, vice president of Instruction at OCC, said the symposium is important.