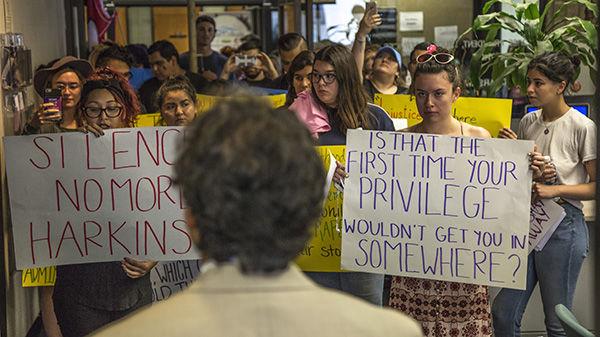 Protestors stand in front of OCC Vice President of Student Services Madjid Niroumand as he replies to their demands in the Administration building on Monday. 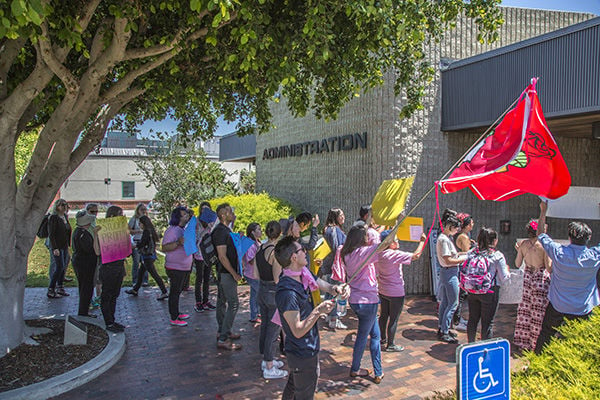 Protesters stand outside the Administration building on Monday. 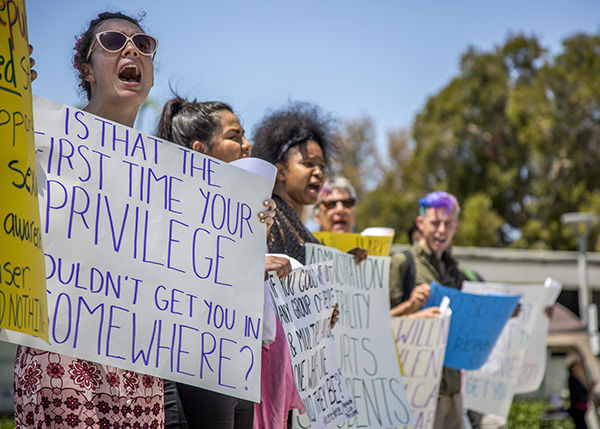 Olivia Hanson, (left) 22-year-old sociology major, leads a chant with protesters in the Quad on Monday. 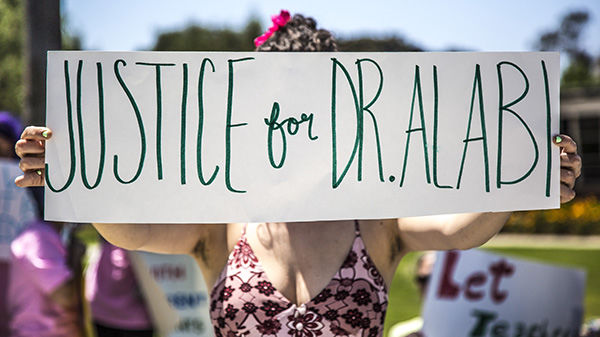 Olivia Hanson, 22-year-old sociology major, holds a sign during a protest in the Quad on Monday. 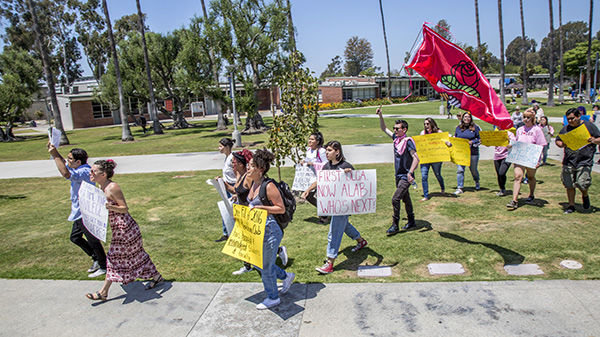 Protesters chant while walking from the Quad to the Administration building at Orange Coast College on Monday. 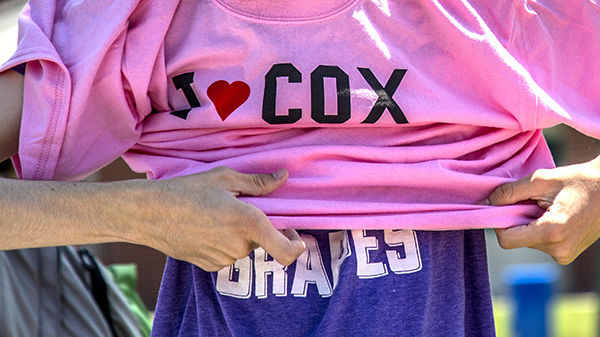 A protester puts on a shirt in observation of the previously transpired events with professor Olga Cox on Monday. 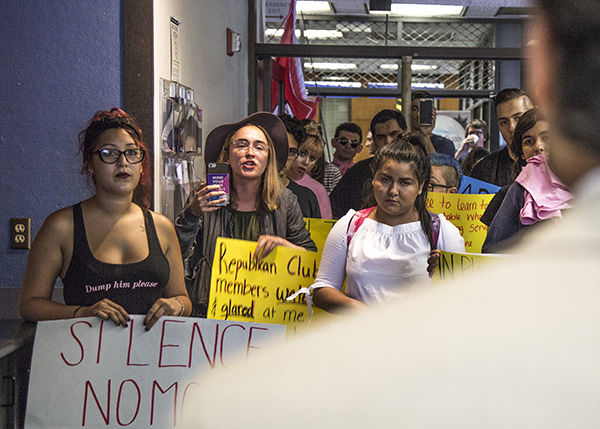 Kaitlyn Hodge, (second from left) a 21-year-old political science major, speaks to Madjid Niroumand inside the Administration building on Monday.

Protestors stand in front of OCC Vice President of Student Services Madjid Niroumand as he replies to their demands in the Administration building on Monday.

Protesters stand outside the Administration building on Monday.

Olivia Hanson, (left) 22-year-old sociology major, leads a chant with protesters in the Quad on Monday.

Olivia Hanson, 22-year-old sociology major, holds a sign during a protest in the Quad on Monday.

Protesters chant while walking from the Quad to the Administration building at Orange Coast College on Monday.

A protester puts on a shirt in observation of the previously transpired events with professor Olga Cox on Monday.

Kaitlyn Hodge, (second from left) a 21-year-old political science major, speaks to Madjid Niroumand inside the Administration building on Monday.

Protesters representing an assortment of clubs at Orange Coast College took their complaints to the Free Speech Zone Monday hoping to bring attention to their grievances over harassment and bullying on campus.

On the heels of an OCC Republicans club news release targeting sociology instructor Jessica Ayo Alabi and calling her out for blocking them from a safe space event, the frustrated protesters took their complaints first to the Quad and then to the Administration building demanding the college take action to protect them.

Angry club members and others on campus said they are tired of Republicans club members harassing and bullying them and it’s time for the administration to stand up for them. They also wanted protection for Alabi.

“It’s unacceptable on a college campus to have students bullying people of color, women, lesbians, bi and trans students. It’s hard to imagine in 2017 that this is occurring,” said President of the Coast Federation of Educators Rob Schneiderman.

Alabi added that the timing of the protest was unfortunate but that students are fed up with campus inaction on their complaints.

“These students here should be studying for their finals, they shouldn’t have to do this,” Alabi said of the group. “This club has harassed students all semester and we could do nothing.”

Approximately 50 protestors held signs and chanted to show their support for Alabi. According to the protesters, Alabi has been further harassed after some of her emails about the Republicans club on campus were released by the group.

Alabi was on hand for the early part of the protest, leaving when she had to go teach a class.

Students chanted slogans in support of Alabi including, “When our professors are under attack, what do we do? Stand up. Fight back.”

Alabi, who started the press conference and protest with a written statement, spoke of her experiences with the Republican club.

“For the entire spring semester, we [Feminist Club] have been harassed by the Republicans club,” Alabi said. “The admin has done nothing.”

Alabi’s emails that went public were received by Joshua Recalde-Martinez, the former president of the OCC Republicans club, through a California Public Records Act request. The club filed the request and received both public and private emails from more than 20 faculty members, staff and administrators on campus.

The demands of the organizers were read by one of the protesters.

First, the group demanded administration provides a clear definition on the difference between hate speech and free speech. Second, they asked to have students be better informed when potential threats to student safety and hate crimes occurred on campus. Lastly, they demanded that campus administration firmly stand beside and defend Alabi.

“This event is not just about Dr. Alabi. We are here today to address a larger problem. First it was Olga and now we’re having to deal with harassment and stalking,” the student said. “This school is the Republicans club’s playground and (administration) does nothing to defend us.”

For their part, the Republicans club also demanded action by the administration in the press release it made public last week. They called for an investigation into Alabi discriminating against club members, that if she did she must be suspended and permitted to return only after she completes an in-depth training on student rights, and that she writes a one-page apology letter to the OCC Republicans.

They also asked OCC President Dennis Harkins to write a letter to the district board of trustees supporting the club’s proposed revisions to board policies to protect students from discrimination based on ideology and asked that OCC improve the training of faculty and staff on how to respect student viewpoints.

During the protest Monday, the campus administration was largely the focus of the demonstration with chants including “hey hey — ho ho admin neutrality has got to go.”

In the Administration building, the demonstrators crowded the office of vice president of Student Services Madjid Niroumand. They were questioning what he is going to do about the harassment by the OCC Republican club on campus.

Niroumand, in attempt to quell the concerns of the crowd, was explaining that the campus had a process to deal with issues of harassment. Kaitlyn Hodge, a 21-year-old political science major and president of the Planned Parenthood club, interjected.

According to Hodge, she has been stalked online and on campus.

Hodge left the office ahead of the other protestors and in tears.

"I’m fed up. I’m so fed up. I’ve heard that speech at least 10 times and that’s why I was so angry,” Hodge said. “Majid gave the same speech they’ve given for the past eight months. We follow their process and they drop our cases and they ignore us.”

Union president Schneiderman came out to support Alabi. According to Schneiderman, it is important to for his union to stand up for professors and students at OCC.

In his own call to action, Schneiderman asked the campus administration to do something after what he called unacceptable behavior by the OCC Republicans club. He said that it is not about Republicans or Democrats but instead about right or wrong.

“Pull the charter of this [Republican] club,” Scheiderman said. “This is not about political party, this is about hate, and administration cannot allow hate on this campus.”

“I disagree with the Republicans club and I’m now in support of Dr. Alabi,” Siddiqui said.

The incident involving Alabi was not the first of its kind at OCC. Late last year, Recalde-Martinez uploaded a video of a psychology professor Olga Perez Stable Cox calling President Donald J. Trump’s election an “act of terrorism.” Cox received death threats that led to her fleeing the state before eventually returning to OCC to teach this semester.

Alabi, who left the demonstration to go and teach one of her classes, said that the semester is one of the worst she had ever had. According to Alabi, the threats she received were “vicious and disgusting.”

According to Alabi, she is unsure about continuing next semester at OCC and remains undecided.